An African Folktale and the Miracle of Water

By: Mary Fran Bontempo
Today’s post regards a special project of our resident artist, Pat Achilles. Please support this effort and thank you! 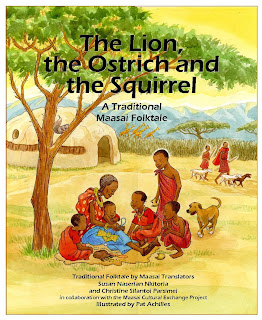 I walked into the kitchen, thirsty after a workout, and poured a glass of water from the sink. Gulping it quickly down, I poured another, and then I stopped.

Sitting the glass on the counter, I looked at it. To me, it was just a glass of water. I could pour as many as I wanted. But to the nearly one billion people in the world without access to clean water, it was a miracle.

For the Maasai people of East Africa, however, the miracle of clean water is one step closer to becoming a daily reality.

The mission of the Maasai Cultural Exchange Project (MCEP) is to help “quench the thirst for water and education for Maasai tribal villages in Kenya, East Africa.” Since 2005, the organization’s fund raising efforts have supported the digging of wells to provide “clean and reliable” water sources along with providing monies for the education of village women and children.

Now, a charming new children’s book published by the MCEP offers readers a chance to open the door to a new cultural understanding of the Maasai people as well as to aid in providing funding for life-giving wells.

In The Lion, the Ostrich and the Squirrel, a Maasai grandmother tells her grandchildren the traditional folktale, a story of a lion that threatens the new born Ostrich babies. Feared by all other animals on the plain, the lion almost succeeds in claiming the Ostrich chicks as her own until a brave squirrel speaks up on behalf of the truth and justice.

Beautifully illustrated by Bucks County artist (and NRFGP contributor) Pat Achilles, the book’s interior pages are drawn in black and white to serve as a coloring book for young readers. The story itself is told both in English and Swahili, to help teach the languages to children in Kenya. Translated by Maasai translators Susan Naserian Nkitoria and Christine Silantoi Parsimei, the text can be used instructionally by American teachers and readers as well.

Due to displacement and changing climates, the Maasai people, once an extremely proud and self-sufficient society have struggled through the years to sustain their simple lifestyle. With the building of wells and subsequent access to clean water, the Maasai people are able to create more stable lives for their children.

Many Maasai women create beautiful beadwork and jewelry in order to help fund their children’s educations. However, though schooling is a priority, it remains costly. The MCEP assists with fees and supplies to help teach the Maasai children and provide opportunities for a stable upbringing and transition to adulthood, from kindergarten through college.

All proceeds from the $5.00 purchase price of The Lion, the Ostrich and the Squirrel benefit the Maasai Cultural Exchange Project and the Maasai people. To order your copy of this beautiful and unique work of art, contact the MCEP at info@maasaiculturalprojects.org or 215.297.8458. You may also contact artist Pat Achilles at patachilles@aol.com or 215-348-4837.

Once you hold the inspirational tale in your hands, you may never look at a glass of water the same way again.

Article first published as An African Folktale and the Miracle of Water on Technorati.