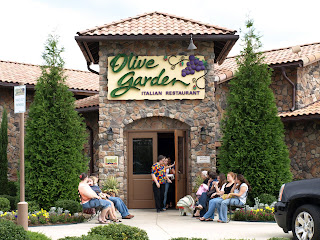 The first time I arrived in Hardin, Montana, I made a comical faux pas which still makes my husband’s family chuckle. “Where is the deli?”, I asked. You see, Hardin, about 45 miles from Billings, Montana, is a town of about 3,000. There’s a theater, grocery store, a few churches and maybe a few more bars. It brings to mind those old western towns, where the sheriff draws his gun at high noon, while some tumbleweed drifts down the street.
But that’s a NYC girl’s view. And that, brings me to Marily Hagerty, the 85 year old reporter for the Grand Forks Herald in North Dakota. If you watch the news, or You Tube for that matter, you know that this nice lady’s small town restaurant review of Olive Garden went viral online. But not because she said anything controversial, or derogatory or weird. It’s because she gave it a good review.
Over 200,000 hits later, Marilyn never realized that she would be mocked after decades of reviews. And she was so because she described this chain eatery as the largest and best restaurant. OK. It’s not a five star eatery with a six month waiting list. But as I learned, small town America can’t support a five-star eatery. But you can get a pretty decent soup, salad and bread sticks. And maybe a little bit more.
In small towns, you run into your neighbors. You stand and chat at the table. You get to wear jeans and you get to take home the leftovers without any eyeballs rolling around in snooty heads, thinking oh, how gauche. You leave with some money in your wallet (which will probably go to pay for your gas, but that’s another story). And you get to do it all again in a week, a month or longer.
Now I love fine dining. I can’t imagine going without it. But as I learned, touting a better-than-thou attitude is exactly what small town dwellers so dislike in city folk—the elitism. And while good food might mean good gastronomic experiences, it doesn’t translate into being better–only different.
So while the Olive Garden may or may not be tops on the list, a big eatery is a big deal for a small town—while maybe not for a small mind. In fact, even in this big Philly metropolitan area, I have had a few meals there myself–where the restaurant is truly big and the meal by Philly standards, not bad at all.
Mary Fran Bontempo2018-10-30T09:52:04-04:00March 14th, 2012|1 Comment