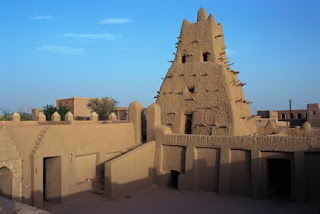 Finally, a place where women rule.
They make all the decisions.
And according to a piece on the TODAY show, it is the only culture where men walk around with their mouths covered by tropical sheets (hopefully, high thread count cotton), and the women show their pretty, smiling faces.
Nirvana, you say? Well, not quite.
Actually, Timbuktu. No, I’m not joking. Timbuktu is not only real, but it is located in the West African country of Mali. An Islamic center of higher education in it’s golden age, it had been a key center for trade, culture and literary pursuits between the 14th and 16th centuries.
Now, I’m no history buff. But the segment on the TODAY show fascinated me because it’s described as an Islamic, but maternal society (not only a contradiction from what we see on the news, but something that seems to have been laid to rest but for pagans, some American Indian tribes and Wiccans). Who would have guessed? Of course, it is poverty-stricken, as so much of Africa is. But exactly how did women score such high points on the cultural scale? How did women get the reins, seize control and take charge?
I’m still searching. But I do believe the NBC producers are correct. Because from what I’ve discovered, despite the poverty, women have been sent outside of the country to learn about bringing electricity to their villages; including solar power. The culture is called Tuareg, and their maternal instincts are quite fascinating. Check out a little about their culture, from NBC:
The Tuareg primary concern is covering their mouths. The mouth is considered the most sensual part of a man’s body and the most revealing. The mouth speaks truth or falsehoods. The mouth expresses fear and love. The mouth can curse bitterly and yell ferocious hateful insults. The mouth can start wars. The mouth can be slippery and sly and woo a woman with deceitful lies. The mouth exposes the soul. It is better to keep such a powerful thing covered up
OK. A society where the men are covered and quiet and the women are in charge? It’s as hard to believe as the name of this land itself. No wonder most people often believe that Timbuktu doesn’t exist. For most of the world, it is truly a contradiction in terms.
So available women: take heed. You might not be willing to give up your flat screen, mall trips and daily Starbucks—but King for a Day? Now that would be a magical journey indeed.
Mary Fran Bontempo2018-10-30T09:56:40-04:00November 10th, 2010|3 Comments