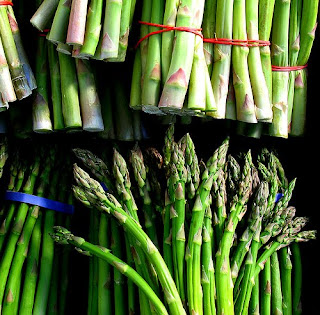 I don’t know about you, but the older I get, the more I like my green veggies (except for peas, which I can’t stomach). My favorite on the list just happens to be asparagus.
Half veggie, half floral (there’s some variety of flower that’s strikingly similar) It’s about that time when asparagus is becoming plentiful in grocery stores. The prices are coming down from $3 and $4/lb. to something more palatable, like $1.99 and even less on special: great news for those of us who like something quick, easy, tasty and good for us. According to nutritional sites, the long green veggies are members of the Lily family; possibly because they’re planted as ‘crowns’ deep in the ground, rather than from seed. They’re high in potassium, fiber, vitamin B6, vitamins A and C, thiamin and fiber.
A green veggie with all of these health benefits? How good can it really be?
So darn good (like so many things), when they’re picked and cooked just the right way. Now, I’m no vegetable expert, and I’ve heard all the wives tales: thinner stalks are more tender, fatter stalks are better and the flowery heads should be turning a reddish color. So, what do the experts say? According to the Michigan Asparagus Advisory Board (yes, a vegetable has it’s own advisory board—and we wonder why we have deficits?), asparagus can grow up to 10 inches in a 24 hour period, if given the right conditions. And the wider the diameter, the better the quality—so at least where asparagus is concerned, big is beautiful. I discreetly pick up a bundle and smell them; there’s nothing more distasteful than the pungent odor of rotten asparagus.
I like mine one of two ways: blanched or grilled. Either way, a good tip I take from Rachel Ray is to snap the asparagus toward the bottom of the stalk, right where it easily bends. No knives necessary to discard the tougher stalk bottoms. Rinse them, dry them and then ready them for blanching in a boiling, salted pot of water for about 7-8 minutes. Remove them and let them sit while you make a topping from melted butter, a squeeze or two of lemon juice, a few shavings of parmesan cheese and salt and pepper to taste. If you want to keep the ‘snap’ in them, when you remove them from the boiling water, throw a few ice cubes on top to stop the cooking.
For grilling, I coat the grill or toss the asparagus in olive oil, place on a hot grill and cook till just browning. Turn to grill evenly, then remove from the grill and season with salt and pepper.
Either way, leftovers are saved for salads with some sort of vinaigrette, or served alongside some poached or fried eggs—–asparagously delicious.
Mary Fran Bontempo2018-10-30T09:56:22-04:00March 10th, 2011|2 Comments