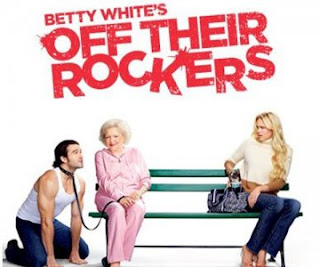 Who doesn’t love Betty White, right? She’s got that sweet granny look attached to the mouth of a 20 year old. Bless her heart. And she takes it to the streets with other irreverent seniors in her newest tv venture: Off Their Rockers.


Wednesday nights at 8pm on NBC are a throwback to those Candid Camera days. You remember: those unsuspecting folks who are caught in a taped prank. Only on White’s show, seniors are pranking younger folks, which to me, makes it even funnier.

On one episode, a man had a full shopping cart impaled on the front bumper of his car. As he drives up to some young bystanders, he asks if they know of a discreet body shop nearby. Giggles abound as the younger set thinks the old guy is ‘off his rocker’—but the joke’s on them. In another episode, a man at a bar is seated with an inflatable date. In his conversation with her, he talks about taking her back to a hotel, only to raise eyebrows and laughter from those seated nearby. You get the idea. Just look at the leashed ‘pet’ White sports above. But the pranks aren’t just pranks for prank sake. They’re senior pranks, and I say ‘prank on.’

The elderly are one of the most criticized groups out there. Their driving, eyesight, memory, slowness, illness. And all of this adds up to people speaking louder to them, ignoring them, hurrying them along, making decisions for them and generally thinking that many of them are really ‘off their rockers.’ So capitalize on it, I say. It’s nice to see the tables turned a little–where we laugh with and because of some spry seniors, not at them.

Check it out. It’s guaranteed to tickle your funny bone.