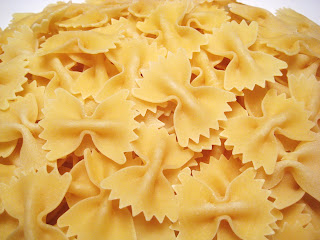 I don’t know about you, but except for the year-round desire for a good burger or steak, I change up my summer menus.
Lots of them involve salad bases; especially since I had an especially good and tasty crop of lettuce this year. But salads everyday? Nah. So, I’ve gone looking for another base and re-discovered pasta.
Most folks eat theirs hot, or in a cold macaroni salad that consists of a tub of mayo. But I suggest that you head for the pasta aisle of your favortie grocery store and pick up some farfalle or mini shells and let the experimenting begin.
This week, after a craving for Italian, I pulled out the mini shells and thought about what would make for good flavors. I had a bag of red peppers, some cherry tomatoes, cilantro and basil in my garden and shredded Parmesan and chicken cutlets in the fridge. So I went to it.
I cooked my shells al dente and let them sit. Then I cut the peppers in half, cleaned out the seeds and set them on a baking sheet. I put them in the broiler until the skins blackened, then let them sit. I oiled the cutlets so they wouldn’t stick and put them on the grill. Then I cut the cherry tomatoes in half, cut up my basil and cilantro, threw them in a bowl, then thought again. Wanting a truly tasteful dish, I ran to the grocery store for some sun
dried tomatoes and pine nuts. I cut up the dried tomatoes, threw in some pine nuts and then returned to the roasted peppers. I peeled off the charred skins, then cut the peppers into strips and threw them into the bowl. I tossed all the ingredients with the cooled pasta, sprinkled with the shredded Parm and poured in a little Balsamic Vinegar to kick it up a notch. The result was great. And even better the next day.
The point is that you can not only make a cool summer dish; you can make it for pennies per person. Next time, I’m going to experiment with Farfalle bow-ties. I like them with butter and grated cheese in the winter, but to lighten it up for summer dining, I’ll use olive oil, a little grated cheese, cilantro, basil and maybe some grilled chicken or shrimp. Or perhaps I’ll cook up some crumbled sausage, grab some diced tomatoes and cheese, cilantro and basil. Then again, I could cut up some broccoli, zucchini, red peppers, tomatoes, onions and marinate them with some oil and Mrs. Dash seasoning—put them into a grill basket until they blacken a bit, add some crumbled feta and mix it all together.
You get the idea. Steal some ideas from recipe sites online or favorite restaurant dishes you just love. One of the good things about being around the block a bit, is learning about flavors and which go well together—what flavors we enjoy—then do it all for ourselves.
Mary Fran Bontempo2018-10-30T09:51:18-04:00June 21st, 2012|1 Comment