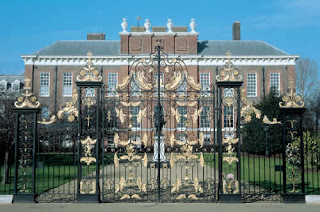 There was a fascinating news story about a series of unfortunate events that have plagued many inhabitants of Kensington Palace. So, being the curious girl I am, I just had to look into it. Fascinating. Great way to begin the new year, huh?
It appears as though Queen Caroline died here from blood poisoning following her 8th pregnancy (poor fertile gal). Queen Mary (builder of the abode) died of Smallpox just shortly after moving in. Princess Margaret had a scandalous divorce from Lord Snowdon while living here. None of Queen Anne’s 17 pregnancies (even poorer fertile gal) resulted in adult children, all who were born here and William III died here while absconding the throne. Then, in recent memory, there was Princess Di’s flower filled gates following her own loveless, scandalous marriage and untimely death. There you have it. And us modern folk are scared of 100 year old haunted houses? Chump Change.
I’d be a little skeptical if I was Kate. There’s a lot of history there. But of course, there is a lot of history there. I suppose if any of our 20th Century homes might pass the 300 year mark, there might be a bit of head-turning news within our walls as well. But it has to creep you out just a bit.
I, myself had always wondered about the curse of Kensington Palace—not a deadly one, but one of wanting to trump history—to do something unconventional, unexpected, unheard of—like storing all of the Queen Anne in place of a welcome Pottery Barn theme. Stashing all of the formal wear in lieu of a nice comfy sweatsuit and running shoes. Putting away the staff and the fine 200 year old china for Chinese take-out on a paper plate. And hanging up gaudy Christmas ornaments and lawn trash for the holidays. Oh, my! How utterly gauche!
It all comes under my mantra of not only not being ready for granny panties, but not being ready to be told how to live, what to wear, how to act—etc, etc, etc. While it seems that Kate is on the way to a way better marriage than her mother-in-law, you still have to wonder. There’s enough pressure without the scrutiny of tradition under your nose. We can only hope that Kate has the shoulders to carry it, the guts to withstand it and the nerve to tell those who try to change her—to bugger off. A house, after all, is not made of sticks and stones. A house, as they say, is made of love (and beautiful, comfy furnishings) alone.
Long live the future Queen.
Mary Fran Bontempo2018-10-30T09:53:39-04:00December 29th, 2011|0 Comments