A Bike & A Baguette 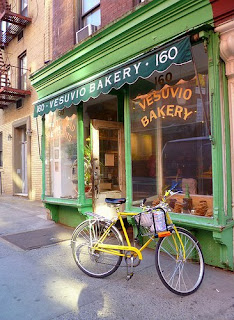 by Chrysa Smith
It hit me this morning while walking the Poodle Posse. As a city girl growing up in NYC, I was skinny. It was after getting married and moving to the burbs in ’85 that the ever-since, perennial 20 lbs creeped on (but for an especially ambitious few years of Weight Watchers and regular trips to the gym). And after all these years, and the various exercise crazes that have come and gone, have I realized that walking, biking and playing tennis are really still, the only forms of exercise that I’ve ever really liked. So maybe, despite the exercise videos, the that my husband purchased for my 50th birthday (yah, a thoughtful gift huh? Ask me who’s been on it) and visions of someday taking a Zumba class, that I embraced my authentic self.
After settling the poodles down, I was once again without a car for the day (that’s a Grunt & Groan for another day). So, being the eternal optimist, I decided to turn it into a healthy adventure. I packed up my little bike bag with cell phone, cash and tissues and decided that I would bike to the grocery store, pick up what I absolutely needed and could carry, and bike back. It’s only about a three mile round-trip. But after a half hour walk, it added an additional half hour of almost continuous movement. I even stopped at the card store for my mother-in-law’s birthday card and I got to thinking that if I (and others) planned their errands around a bike ride, we’d all be in much better shape.
So my lesson from this morning? Instead of running to the local grocery, card, pizza shop or nail salon in your car, think about biking (unless you’re 10 miles from civilization). It’s a peaceful and relaxing way of adding exercise into your day, without any cost (as long as you own a bike). After I got to the strip center, I realized that not only could I shop at the grocery store, but I could actually ride my bike to get my nails done, have lunch at the pizza shop, Thai restaurant or Subway (I’d have to take the long route home to make up for the carb load), browse the local home furnishings shop, do the card store, drug store and if I could bring a stronger bag along, pick up a bottle of wine for dinner. It started the wheels churning. To what other locations could I bike? Could I make it to Wegman’s? The dollar store? Clothes shopping? Now, that’s true multi-tasking—-getting your exercise and errands done all in one step–without the need for memberships, cute outfits or the gallon of gas it takes to get there.
To really do it right next time, I’ll ride on over for a baguette, bottle of wine and hunk of cheese, so I can look like one of those picturesque French still lifes. See, it’s not only the French portion sizes, but their walks and bike rides for groceries and daily life errands that keeps them slim, trim and healthy. But for now, I’ll get my IPod and my bike basket on, and get spoked to do some peddling.
Right after I finish my croissant.
Mary Fran Bontempo2018-10-30T09:56:55-04:00July 22nd, 2010|1 Comment