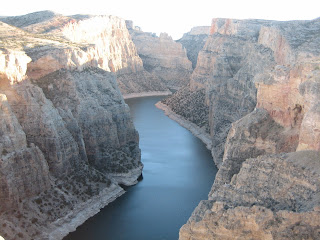 For the better part of 20 years, I’ve made the cross-continental passage from Philadelphia to Billings, Montana. That’s the childhood home of my husband and a world so different than mine—a NYC girl.

I can still remember flying in for the first time. As the pilot announced our descent into Billings, I was sure he was wrong, as I looked out the window and saw virtually nothing for miles. Well, nothing but rolling, brown hills.

For those who live between Kansas City and LA, it’s probably no big deal. But for me, I might as well have landed on the moon. Unlike the major metropolitan areas, you surely know when you’ve left one town and not entered another for say—an hour or so. And I quickly learned that Indian reservations have just not discovered the joy of a Kosher sandwich. So much for culture shock.

But one of the most memorable days on each journey, (aside from time spent with an eclectic group of relatives) is always the day spent boating, sunning and sightseeing on one of the most majestic river canyons I’ve ever seen (sounds like I’ve seen so many, but remember, I’m a city girl, so my exposure to canyons is limited): Yellowtail Dam of Big Horn Canyon.

This 70 mile stretch of lake is known both for its walleye and water sports (world-class fishing/boat rentals/party boats/water skiing). It’s pristine (you could actually spend an afternoon with seeing virtually no one), historic (located on a Crow Indian Reservation/ prehistoric dinosaur-dwelling territory/ route of Lewis & Clark and near the Custer Battlefield) and definitely worth a visit.

Poised below bellowing canyon walls, you certainly feel your small stature in the greater world. The beauty is untouched and the small, caves on the cliffs make you wonder if ancient tribes had scaled the walls and left their own brand of hieroglyphics there, or a grizzly and family have taken up residence for the winter.

You get the idea. It’s majestic–from it’s pure waters to rock formations to the occasional Big Horn Sheep and Grizzly you might catch glimpse of. You can make it part of a very beautiful summer, outdoors vacation by combining it with Yellowstone Park (including cute towns like Red Lodge and West Yellowstone along the way). For visitors to the dam, boat rentals are available and highly suggested–bring the sunscreen, your lunch and a camera. Check it out on: http://www.nps.gov/bica/index.htm.