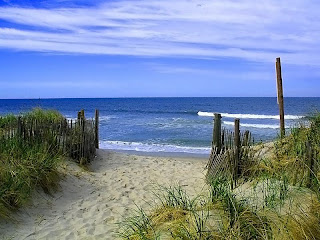 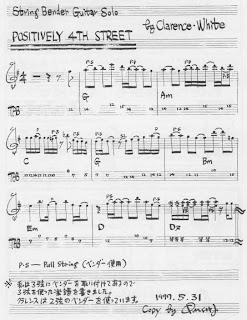 I recently turned 50. And within a week of this momentous occasion, I went to my favorite place—the beach.

Alright, I admit, now that I’ve lived in Southeastern PA for 23 years, I’m also calling it ‘the shore.’
Call it whatever you like, but I’m being called more and more by an inner spirit to spend more and more time there, and discover more and more favorite places to bike, walk, get a manicure, watch sunsets, dolphins and of course, eat.
Alright, we did Mac & Manco’s manhole-size pizza and filled our tub to chubby perfection at Johnson’s Popcorn. That’s kind of a given now. But it’s the discovery of those little jewels that always delight me. And quite frankly, I’m sometimes a bit hesitant to expose the greater world to my little-known secret. But, gotta give it up on this one, because it’s really good food. It’s really relaxed and laid back. But it’s also really age-appropriate—meaning, I’m not fighting some kid in jams and bare feet for a table. It’s a most civilized customer base, and you can find it at Positively Fourth Street—on the corner of 4th & Atlantic in Ocean City, NJ. 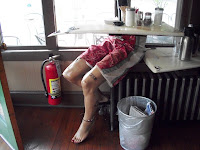 It’s an eclectic-looking corner shop; painted in eye-catching colors. Walk in the door and immediately catch a glimpse of their ‘fixins bar’—fixins for beverages that is. It’s a piece of surfboard anchored above some surfer legs. Just genius decor for it’s location. Turn around and face your conscience. A glass pastry case holds some great offerings for breakfast or anytime snack—-chocolate and ricotta muffins, fennel and ricotta muffins, berry dotted concoctions, chocolate chip cookies.

Five minutes spent with one of the key kitchen players tells me what I need to know. He started cooking in college because he wanted to eat something better than cafeteria food and he hasn’t stopped playing with utensils and baking sheets since. Sounds silly, but I meet lots of people who never graduate to that kind of thinking, and miss out on an entire world of tastes and treats.
Behind the counter, is the place where some of the best brewed beverages can be found. My husband swears by their espresso, and I tried my first tea latte—-absolutely delicious. Eat in or sit out and watch the bikes, dogs and tourists go by. Listen to some Sinatra and make the world go away—– 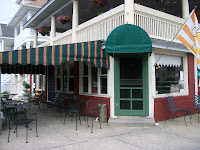