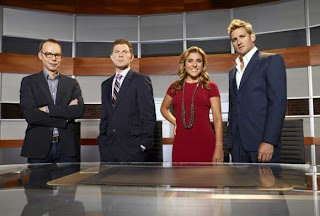 Have you been watching America’s Next Great Restaurant? I know, another reality show. But besides the fact that it involves food and becoming an instant restauranteur, it’s got Curtis Stone :). If you don’t know who he is, well, you’ve obviously been hiding under a saute pan. Because Curtis is not only an accomplished chef who appears regularly on popular TV shows like the TODAY show, he’s by far, hands down, the most handsome chef I’ve ever seen. (In case you don’t have your glasses on, he’s the one on the right) And I have to ask: does he wear a smudge of lip stain? Because he has the reddest lips I’ve seen on a man, but for Ronald McDonald (only in a good way) But I digress.
I didn’t intend to go on about Curtis :). What interests me about the show, is like The Apprentice, they begin with a group of individuals, each with a new restaurant idea. Each week, as the panel puts them through a grueling test of meal ingenuity, taste, presentation, restaurant name, logo design, service, etc., there’s an elimination. So far, Joey (Brooklyn Meatball Company: aka: Saucy Balls–original name which didn’t go over so well, and I think, for the best) is still in it. And I must admit, I’m rooting for him, because I believe he has the widest sell appeal (plus, I was born in Brooklyn, live near Philly and can appreciate his street smart Italian-American appeal 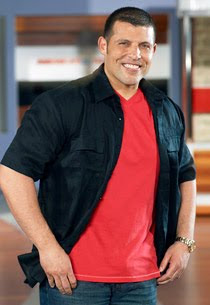 –ya know what I’m sayin?). The others who are still hanging on include an astute Indian business man with an Indian-fusion concept called Spice Coast, and a real likable guy with a healthy soul food concept (He’s my second favorite), called Soul Daddy.

But I give all of these folks credit. Nobody can do it all. While the panel, who are also investors, make it possible to get the graphics done, their food ‘stands’ and restaurant prototypes in place and purchase the food, the final decision—the bottom line of what the restaurant concept is, will be and how it will be marketed is up to one person. That’s a lot of pressure.
Knowing how to cook is one thing; creating menu items that pro chefs like Bobby Flay and Curtis Stone are tasting is intimidating at best. Then, each creation goes onto test trials with the general public, who place tokens at the stations of the restaurant concept they like best (Yikes! More pressure to perform). The entire panel—Bobby Flay, Curtis Stone :), plus Steve Ells, the brainchild of Chipotle Grill and Lorena Garcia, a restauranteur from Florida, put in their two cents, including offering up advice on what’s wrong with their meals, logo, service, the sauces, the uniforms and anything else that goes along with the creation of the perfect, new restaurant.
Now in all fairness, the panel of investors are fronting lots of cash. The winner of America’s Next Great Restaurant will receive three restaurant locations for them to open their micro-chain: NY, Minneapolis and Hollywood. Hardly low rent districts. It’s a huge undertaking, and I believe, that if I had been part of the competition, I would have been eliminated on week one for becoming tongue-tied and looking like a babbling fool, as my level of performance anxiety went through the roof, and as I stood there staring at Curtis like a love-struck school girl. 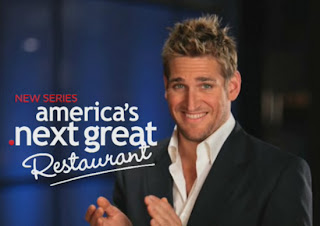 It’s all winding up this week. And I know one thing. On a future trip to NY, when the restaurant (whatever it may be) is up and running, I will go there to support it. The winner (and all who participated) could use as much support as they can get.
America’s Next Great Restaurant can be
seen on Sunday night, NBC.
Mary Fran Bontempo2018-10-30T09:56:11-04:00April 28th, 2011|0 Comments