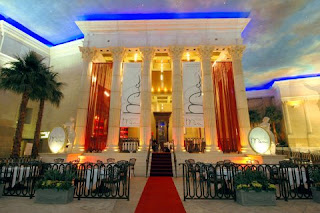 Let me be frank. I met my husband 27 years ago in Las Vegas. No, I wasn’t serving drinks or auditioning to be a show girl. Rather, we were both attending a trade show and just happened to sit at the same table for lunch. The rest, as they say, is history.
You would think this curious story might make me just a bit warmer to the whole Viva Las Vegas scene. It doesn’t. Over the years, I’ve had numerous annual opportunities to escape the cold of winter and head to Vegas for a few days; but the tinsel town atmosphere does little for my soul.
Yet, with a changing casino scene closer to home, Atlantic City does call my name in mid-Winter. And that is purely because of the ability to feel like you’re on the beach, while staying warm (thanks to Caesar’s shops on The Pier), and catch a good meal at one of the many upscale restaurants that now dot the city.
My new favorite? Mia: http://www.miaac.com/index_home.php Imagine this: You’re in Rome. Voluminous columns surround you. The sky is blue. The fountains are running. And there is a larger-than-life size statue of Caesar himself staring sheepishly at you; completely unashamed of his skimpy attire. You enter a monumental structure, have a seat and partake in some of the most well-prepared Italian edibles you’ll find at this seashore. I began with a mixed green salad; the most memorable one I believe I’ve eaten in years, thanks to fresh greens, herbs and a wonderful white balsamic dressing. I’m not a big lunchtime salad-only eater, but could easily be convinced to live on this indefinitely. This was followed by an appetizer size portion (yes, they serve half and full portions so you could actually sample a few things) of a linguine with lobster; a zesty meal with red sauce. My husband had the Ahi Tuna, seared rare, on a lo mein pancake with spinach. He raved about it. We shared the creme brulee trio: traditional, espresso and pistachio. Just heavenly; especially the pistachio. And this was all followed by some of the most polite, caring service I’ve seen in restaurants of this price point.
Of course, all of this is thanks to Mia’s gastronomic caretakers: Chefs Georges Perrier and Chris Scarduzio (whose daughter’s name is Mia); well known in world culinary circuits and the Philly restaurant scene. Perrier’s Le Bec Fin is chef boot camp that launches the up-and-coming to their own successful eateries. And Chris Scarduzio? He’s a Philly guy, culinarily schooled who climbed through the ranks to partner in successful ventures with foodie celebs like Georges Perrier. 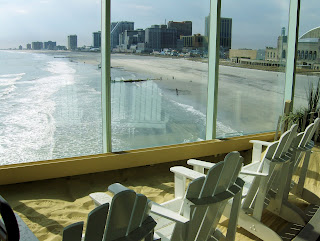 Do a pre or post-dinner stroll on the pier, a giant, glass-enclosed shopping center that sits atop the Atlantic coastline: beach chairs and sand let you sit in the sun, watch the waves and feel like it’s four months later. At sunset, it’s a sight to behold.
Ahhh. It’s one of those day trips that’s worth the price of gas to refurbish the stomach and the soul. If you’re planning a trip to AC, I highly recommend both.
FYI: Atlantic City’s Restaurant Week is coming; Feb. 27-March 5. There are 80 participating restaurants where lunches can be had for $15.11; dinners–$33.11. And some sun, sand and surf? Priceless. Check it all out at:http://www.acrestaurantweek.com/. If we can find some time this weekend, we might head down and do it all again.
Mary Fran Bontempo2018-10-30T09:56:24-04:00February 24th, 2011|1 Comment