Women, Equal Rights and the Brits 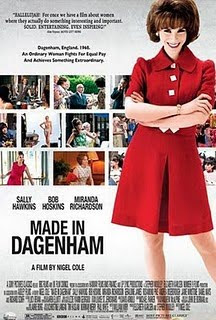 by Chrysa Smith
Having been born in the United States in 1960, I was ‘crossing over’ to a time of unequalled civil rights movements. Too young to be aware or care, I realize now just how lucky (I think) it was to be born at a time when women would eventually have more choices, options, acknowledgement for their work.
We’ve come a long way indeed, although throughout the world, still have a heck of a long way to go.
This was brought to mind yesterday, while watching Made in Dagenham, a jewel of an arts film from the BBC and UK Film Council. Set in 1968, the movie chronicles the true story of a group of female machinists(sewing seat covers) at a Ford plant in Dagenham, England. As counterparts to their male machinist union members, the women received about 20 cents on every male dollar. Thanks to the encouragement of union rep and sympathizer (whose mother struggled to support her family on meager wages), one woman bravely organized and led her band of female seamstresses and their fight for equal pay to Ford’s top management levels and even the Prime Minister’s Office.
While some of the names and locations have been changed for theatrical purposes, the fight for fairness is quite ‘right on’ and led to the Equal Pay Act in England in 1970. (In the US, the Equal Pay Act was passed in 1963, followed by the Civil Rights Act a year later) Needless to say, this was enhanced by another woman with a bit more influence; Secretary of State Barbara Castle, who struggled to balance pressures from a large employer (Ford Motor Company), the political repercussions of interfering with Ford’s profits and her own conscience.
The undertones hit familiar chords 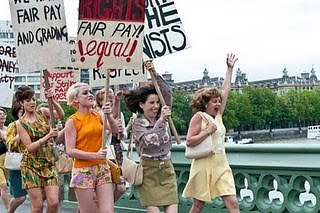 with all women: balancing work and family, making ends meet, taking on a more acknowledged role than a husband, the laws of unintended consequences, following your beliefs, facing an unknown future. But it did it with a light heart and some humor–most enjoyable to watch.
Check out the trailer below, starring Sally Hawkins, Miranda Richardson and Bob Hoskins. The film, released in 2010, is available through Blockbuster Video. http://www.blockbuster.com/browse/catalog/movieDetails/490112
For a peek at the highlights: http://trailers.apple.com/trailers/sony/madeindagenham/
Mary Fran Bontempo2018-10-30T09:56:24-04:00February 23rd, 2011|0 Comments