Today’s column is by guest blogger, Laura Bontempo. (Yes, that Laura Bontempo!) Enjoy this funny revelation that “proves” we’re much more like our animal counterparts than we admit!
By: Laura Bontempo 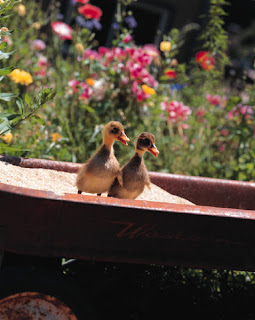 Today, I went to the park on my lunch break, expecting nothing more than an hour away from my desk. What I got was a lesson in love.

Armed with a book and a sweatshirt, I found a bench right by the fountain and plopped down, noticing a sign that said “Please do not feed wildlife”. Still, as soon as I sat, a pretty white duck and a mallard duck came right up to me. When they realized I didn’t have any food, they waddled back over to the water and jumped in.

I closed my book and just watched for a while, welcoming the funny distraction from my too-jumbled head. The mallard duck swam a little ahead of the pretty white one, which I guessed was the girl duck. She swam right behind him as they did a few laps, never really more than a foot or so apart.

They eventually made their way back to the edge where a couple of other ducks were floating around. And then, I think…no, I know…I witnessed my first duck fight.

The girl duck, for whatever reason (no we don’t need to have just ONE reason), seemed to stand up on the water, and angrily flap her wings at Mr. boy duck as if to say: “ARE YOU KIDDING ME?!” Immediately after, she turned around and swam away from the mallard.

Looking confused, as guys often seem to, the boy duck started to make his way over to the angry, but pretty, white duck (I mean, she still was pretty, and chances are it was his fault anyway, right?). He got close, but kept his distance, seeming to know what would happen if he got any closer. The pretty white duck, who (by this time I’d determined she was definitely a “who” not an “it”) was looking in his general direction, seemed to tuck her head into her feathers and fall asleep—or pout; I couldn’t really tell. Either way, I couldn’t get over how much this resembled human emotion and an actual argument between a man and a woman.

A couple other ducks floating around got close to the mallard. To me, it looked as though Mr. boy duck’s friends got word that girl duck was “acting crazy again”. The mallard swam towards them and seemed to quickly turn around to look for his pouting, visibly upset ducky counterpart.

For a split second, I could just picture the mallard going off with the other ducks and just leaving the white duck, because she was CRAZY, but that’s not what happened. The boy duck positioned himself right in between the group of ducks and the white duck. And then, he just sat there. Looking up at her, giving her enough space, but staying close by just in case.

Eventually, the boy duck slowly made his way over, nestled his beak into his feathers and almost seemed to just rest right next to her. It was like a silent, “Okay, I get it….” The girl duck picked her head up several times almost looking back to make sure he was still there.

After a few minutes, the girl duck swam right up next to him, laid her head back down and just floated right alongside her beau. The whole thing was amazing to me. Without one word, the “argument” was solved. A little space, a little breathing room, and they were back to normal.

That was some ducky love.