For Love and Matzoh 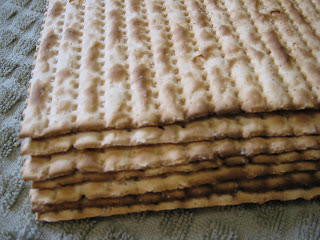 Cheryl Stahle was introduced to me during Passover/Holy Week. She writes, practices yoga, seeks out new stories in local coffee shops and teaches English to high school students. A literary consultant, Cheryl’s passion is in teaching women to tell their own stories.

Sampling her first Passover Seder that week, I asked her to share some of her thoughts as an adult experiencing this religious ritual for the first time. Cheryl is another woman refusing to wear granny panties, saying she relishes her middle years way too much. -Chrysa Smith
_______________________________________________
For Love and Matzoh
by Cheryl Stahle
Who knew that hiding underneath the commonly known bland diet and cardboard matzoh associated with Passover were two food fests, or Seders, celebrated during the eight day Jewish holiday. This middle-aged shiksa (non-Jew) made her Passover debut with an immersion of story-telling, food, wine, song and table pounding. Truly a feast for all of the senses. Before getting to the good parts of a Seder, let’s get this topic off the table first: gefilte fish. Yes, it is as slimy as it looks. Yes, it smells like day-old fish. And this foodie just couldn’t, wouldn’t and didn’t consume.
But what exactly is a Seder? Believe it or not, Maxwell House coffee serves as our guie as the proud sponsor for over 70 years of the Passover Haggadah, a light little read of 58 pages that dictated the sequence of our meal. Seder, literally interpreted as order, consists of 15 steps telling the story of the Jewish exodus from Egypt and their escape from slavery. After contemplating 58 pages of discussion, prayer, song and ritual before food, I found comfort in the four glasses of wine that a Seder requires. And on page six, you can drink and recline at the same time. Now this is going to be an interesting meal.
After a symbolic washing of the hands, karpas, or bitter herbs dipped in salt water begins the four hour meal. Each of the 15 steps serves a purpose from the breaking of the matzoh and hiding of the afikomen (the last food that you can eat before the next night), the retelling of the exodus story begins. Four questions, asked by a child, are answered by adults as a way to continue the oral history of the Jewish people.
At around step five of the Haggadah, diners recreate the building of bricks accomplished by slaves by eating charoset, a mixture of fruits, nuts, coconut and spices. Definitely a stick-to-your-ribs kind of appetizer, but the blending of flavors and tastes justifies the demands for recipes from other diners.
Because the Seder lasts many, many hours due to the multiple blessings, ritual handwashings, questions and song, expect your food to be well-done. However, a slow-cooked brisket, no matter how blackened it is on top, melts in your mouth. A hearty helping of veggies and fruit round out the main course of the meal. No potatoes, no rice, no bread—you get the picture, just matzoh.
What feast doesn’t include dessert? Luckily, glass of wine number three is enjoyed about now, which makes the harsh reality of a matzoh-based dessert less important. Consider this: no flour, no yeast. That leaves matzoh meal. Matzoh covered in chocolate, matzoh covered in anything to mask the blandness. There are also attempts at cake, but I become concerned when my dessert goes THUD when placed on my plate.
Cheryl Stahle@gmail.com
More of Cheryl’s writings on http://poserproject.blogspot.com
Mary Fran Bontempo2018-10-30T09:56:08-04:00May 12th, 2011|0 Comments