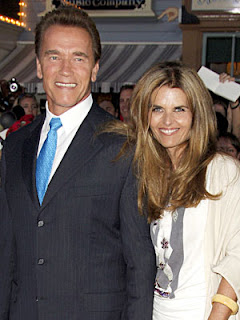 Hasta la Vista, Baby.
Isn’t this mean? Maybe, but I just couldn’t resist.
This line came from one of Arnold Schwarzenegger’s ‘blow ’em up’ guy flicks: Terminator 2. But the line has also come to life as he and Maria Shriver may be calling it quits on their 25 year marriage.
Truth is, whether I like a couple or not, I feel sad whenever I hear a long-term marriage go kaput. It goes against everything I was taught and felt and believed in growing up–and really, still do. As a younger, naive girl, I would hear about divorce, which for better or worse, no one in my family had experienced (yet)–and I would say to myself: I’ll never get divorced. I won’t get divorced. As if I could mentally will it, and truthfully, think of it as some sort of failure. And failure just wasn’t on my list.
People will glibly throw around their own non-professional analyses of these life-changing events: ie. celebrity marriages always fail, he had a reputation with women, politicians have huge egos and it’s rare that their marriages last. Shriver even caught grief that Kennedy women have always looked the other way on galavanting husbands.
Now, after a 25 year marriage of my own, unplanned life experiences and a little maturity, I see just how delicate marriage is. It has nothing to do with will (unless you are willing to surrender to a marriage of life-sucking martyrdom). From what I’ve observed, it has more to do with constant communication (even when the communication isn’t pleasant), how you raise ‘issues’, how much respect you have for being part of a team (that is, really being in sync on major issues), how much you let diverging life paths pull you away from each other, regular long-term absences, letting each other explore their interests and follow their paths and mutual respect. Have I covered it all? I’m sure not.
The truth is, as disheartening, uncomfortable, non-secure as it sounds, as it often is with life, there is no magic formula. It’s not a scientific or mathematical formula that one can count on: like A + B will always equal C. It’s so much more of a gray area than that. And so many more people, refuse to live their lives in quiet desperation, as some may have done in the past—due to religious beliefs, an indelible view of vows and bonds and cultural criticism.
So, as it went with Charles and Diana, Al and Tipper or the neighbor down the block, there’s one thing I know for sure: Marriage is an enigma wrapped in a riddle. Hopefully for you and yours, the ending is at least on most days, Happily Ever After.
Have a view of your own on what makes marriages last (or not)?
Share your recipe here.
Mary Fran Bontempo2018-10-30T09:56:08-04:00May 11th, 2011|0 Comments