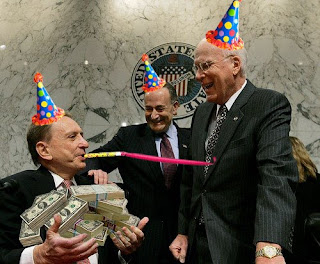 If you didn’t get your fill of ridiculous political ads and commercials before the last national election, you’ve got your choice now, as the PA gubernatorial and senatorial races gallop on.

There’s Tony Williams–chubby guy with a nice-enough face, who plays ‘hot potato’ with a cardboard box. Let’s see: oh yah, he thinks outside of the box, because he talks about education and tax issues.

There’s the anti-Joe-Sestak commercials—approved by the lifetime Senator Arlen Specter, who’s given Joe a new nickname: No-Show Joe. Love it!! According to Specter, Joe doesn’t come to meetings, or pay his staff very much. Maybe that makes him a fiscal conservative, or in the ominous ‘sign-off’ at the end of the commercial, perhaps, just another politician. (so unlike all of the other contenders)

But my favorite so far is the anti-Arlen Specter commercial, run by the Sestak folks. Some digital enhancing of a news clip has ol’ Arlen talking about his ‘change of parties’ as a reason for ‘getting re-elected.‘ Look closely at his mouth and the dialogue, and see if it doesn’t remind you strangely of ventriliquist Senor Wences and his trusty fist puppet from the old, Ed Sullivan show.

Does all of this nonsense tell us anything about good leadership? Or the fact that our government offices should have a set of monkey bars and see-saws out back? I’m not sure. But I do know that if a sand box gets included in the plans, Joe Hoeffel stands ready with a pretty pair of pink flip-flops.