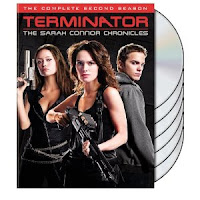 I don’t like action films and didn’t plan to watch The Terminator, the SF film with Arnold Schwarzenegger as the title character, thinking it was about a cyborg from the future, loose in 1984 LA in a killing spree.

But when my friend Pilar rented it claiming it was a love story, I reluctantly watched it with her. And she was right. Yes, the pesky Terminator is there wrecking mayhem. He was sent by Skynet, the artificial intelligence network that had almost annihilated humanity in the future to destroy its last threat, John Connor, the human leader of the resistance by killing his mother Sarah before he’s born.

But the movie is also the story of Kyle Reese, the resistance fighter from 2029 sent to protect Sarah from the Terminator. As things happen, Kyle and Sarah fall in love and have a son, who, in one of this cool mind benders of time travel, is/will be John the leader of the resistance.

I didn’t watch the next two Terminators movies, but I did watch and loved The Sarah Connor Chronicles, a TV series that ran for two seasons on Fox (2008-2009).

When we met Sarah in the pilot episode, she’s a single mother raising a 15 year old boy she knows one day will save the world, but that right now is just an ’emo’ teenager giving her grief. She is also pursued by the authorities that think she’s crazy, and by another cyborg from the future sent to kill John. This time the future John sends a girl-cyborg to protect his younger self. With her help they escape being killed by jumping through time to 2007.

In this new future their leap has generated, Sarah and John work against time to stop Skynet from being created, fighting cyborgs, hindered or helped by characters both from the present and the future whose alliances shift as the show progresses.

I liked the intrigue of switching alliances, the teasing aspects of the time travel paradoxes, and the questions the plot rises about what makes us human. But what really hooked me to this story was Sarah.

Unlike the naive girl of The Terminator movie, this Sarah is a tough, resourceful woman. A mother fighting for her son against insurmountable odds. She is the kind of woman I want to be when I grow up.

At the beginning of the second season, John who has till then donned long hair and an ’emo’ attitude, shaves his head. From them on, the mother/son relationship changes. John starts making his own decisions. And even, as he makes mistakes more often than not, he’s in the way to becoming a man, the leader that will, I hope, one day defeat Skynet. And I say ‘I hope’ because the show was not renewed for a third season.

But if you want to watch the first two seasons you can do so now on DVD, with the advantage that, if blood is not your cup of tea, you can skip the gore, as I do.