I Love a Parade, I Think 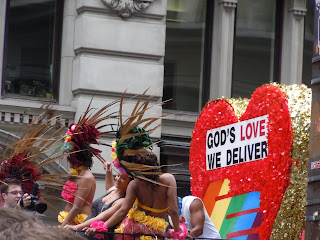 by Chrysa Smith
I’ve marched in the NYC St. Patrick’s Day Parade. I’ve been an onlooker at the Labor Day and Macy’s Thanksgiving Day parades. So when Carmen (fellow blogger) and I were on a crowded, NYC bound train on a Sunday morning and someone mentioned a parade, I immediately went to my mental calendar. It’s June 26th. Flag Day has passed. It’s not Veteran’s Day. So what on earth could it be? 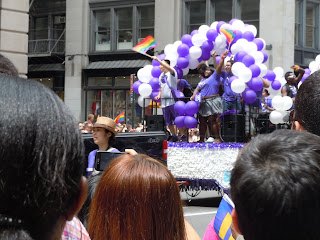 As we made our way to the bookstore where Carmen was doing a signing, we noticed many same-sex couples passing by. That’s not all that uncommon in NYC. But as we turned up 18th Street toward Fifth Avenue, we saw flags, stickers and bizarre outfits that would have made Frenchmen at the Moulin Rouge blush.
Yes, it was the annual Gay Pride Parade. And it was amped up multiple times thanks to the recent New York State legislature’s passing of the Gay Marriage Bill.
Almost immediately, Carmen turned to me and said, “And here we are two women together in NY this day.” She was right. We were among the minority of ‘straight’ folks anywhere near Fifth Avenue that day. So needless to say, after Carmen finished her turn to speak on a panel of six 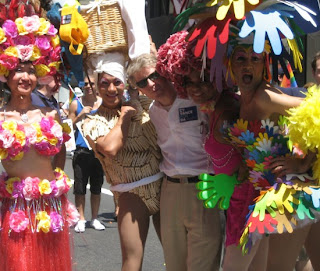 authors, I made my way up the street to get a better look.
I’ll be honest. I know several gay men; enjoyable, funny, interesting folks who blend into the fabric of community. It bothers me not that they share their lives together, and I do believe that they are entitled to the benefits (like other non-married folks) to reap the civil rewards of partnership: namely having your partner be able to share in your health, life coverage and benefits; allowing them to be considered ‘family’ in the sharing of their life decisions.
What I do struggle with, whether it be male or female, gay or straight, is when I see outlandish, garish, attention-seeking behavior and public displays of affection that are beyond good taste. Men in thongs (no pants)? Never a good look. T-shirts that declare the affection for one’s genitals? Not on the red carpet—ever. Drag queens? Save it for the Broadway show. A man calling himself a b…..h? Sorry, that’s a term reserved for female humans and dogs. I caught sight of only one or two men that I could hear myself internally say, “What a shame he’s gay.” The vast majority of parade participants? A circus act. And that is what makes many straight folks so very uncomfortable. If I could have closed my eyes and dressed the same men in Armani or a pair of Calvin Klein jeans, it wouldn’t have been as lavishly entertaining, but certainly for their causes, much more palatable.
Mary Fran Bontempo2018-10-30T09:56:00-04:00June 29th, 2011|1 Comment