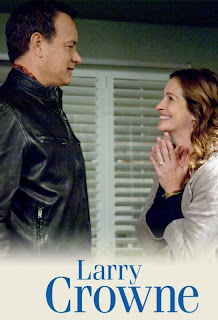 I like Tom Hanks and I like Julia Roberts. So on a hot summer afternoon, my husband and I took in a showing of Larry Crowne; starring both.
At first I wasn’t sure about this film. It hit a little too close to home in light of today’s economy. A dedicated worker gets downsized from his long-term retail job—-the joy of his life. He is told by management that his lack of a college education is the problem; holding him back from any possible advancement in the company. Much like Forest Gump, Larry Crowne, a simple guy, shows up at the local community college and strikes up a conversation with a professor/administrator who casually tells Larry about two courses that will change his life. And again, ala Gump, Larry does as told and winds up in a Speech class taught by a cynical and unfulfilled Roberts, who believes her students don’t take her seriously and maybe even worse, that she doesn’t make a difference. Through some grueling semesters, Larry meets up with a free spirited college girl, who changes his mode of dress, gets him riding a scooter and redecorates his home. Through it all, he is both affected by and has an affect upon Roberts, as she teaches him to have confidence in himself and he teaches her that she really does make a difference.
Was it one of those movies I can watch again and again? Probably not. But for this control-freak, it demonstrates a lesson I can never receive too often: and that is to go with the flow and see what happens, jump into the unknown, take a dive and see where you land. In the movie at least, Larry’s willingness to follow his nose landed him a life that was much more full, rewarding and possible ‘meant to be’ than that precious job he lost.
The movie was cowritten by Tom Hanks and Nia Vardalos (Greek Wedding).
Check it out: http://www.larrycrowne.com/#/home
Mary Fran Bontempo2018-10-30T09:55:57-04:00July 8th, 2011|0 Comments