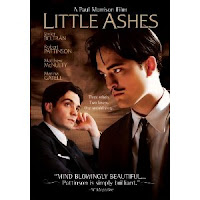 directed by Paul Morrison
reviewed by Carmen Ferreiro-Esteban
Touching base with Chrysa’s post this week about the Gay parade, today I will review a beautiful and little known movie about the friendship and impossible relationship between two of the artistic giants of the XX century: the poet and dramaturge Federico García Lorca and the Surrealist painter Salvador Dalí.
The movie, a British/Spanish collaboration, is called Little Ashes, the title of an early painting of Dali, the two young friends discuss during an idyllic holiday they spend together.
Little Ashes starts in 1922 when Lorca (24) is living in Madrid in La Residencia de Estudiantes (a University dorm if you would) with several friends, among them Buñuel (who will become a well known filmmaker, Le Chien Andalous), when Dalí (18) arrives. Lorca is shaken by his strong attraction to this shy and narcissistic youth who thinks himself a genius.
That Lorca was homosexual there is no doubt today. But to be homosexual in Spain in the 1920s was not something to flaunt about because it was a crime punishable with 14 years of forced labor. Besides, Spain was a strictly Catholic country, which meant that in Lorca’s mind, being homosexual was a sin and a shame for his whole family.
What all this means is that Lorca and Dalí’s relationship would not have been an easy one in the best of circumstances. If you add to this Dalí’s pathological fear of being touched, Buñuel’s jealousy over loosing Lorca’s friendship, a smitten girl’s determination to make Lorca love her back, and a country already split in two political factions that eventually will fight each other to death during the Spanish Civil War (1936-1939), you will have some of the ingredients that make this movie such a powerful and heart wrenching story.
The actors, both the Spanish and the British, are excellent, including an almost unrecognizable Robert Pattison (of Twilight fame) as Dalí.
I agree with Chrysa some of the people in the parade went well beyond good taste. Nobody would accuse this movie of same.

Little Ashes is a 2008 movie and is now available on DVD (http://www.amazon.com/Little-Ashes-Javier-Beltran/dp/B002SF9YUM).