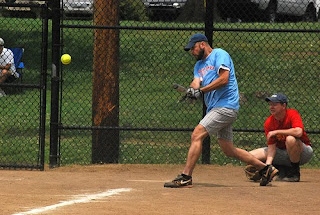 by Chrysa Smith
In the warmer months of the year, my husband’s been known to play on up to three recreational softball teams at the same time. Who’s afraid of growing old? I digress. Forgive me. The real point of my writing here is not to talk about his desire to keep the athlete running well into senior years, but to talk and giggle about middle-age men, just as catty and manipulative as a teenage girl. I just love it.

Over the years, I’ve been present at games, have listened to Mark tell stories, and now, watch emotional emails fly back and forth between league members. There have been fist-fights over player comments made to opposing player kids who have come to watch the game, complaints over ‘unfair bats’ used to unfair advantages, team chit-chat over the players that should be returned to the minors, teams that have split off due to confrontations with league officials, arguments over schedules, playoff dates, times and calls made on the field.

Perhaps it’s all part and parcel of participating in any organized sporting event. I’ve played tennis with ladies who’ve cried at losses, argued over calls, felt compelled to tell partners how to play the game (since they obviously had no clue). Come to think of it, that’s why I hate playing in organized leagues. But there’s something so very special about men over 50 bickering like little boys (or girls) over the game. Not only the game of softball, but the game we all play in trying to be on top, number one, the best—a winner.
So I have myself a solemn snicker when I read these and when I hear men talk about the cattiness of women. I just slip on my snide sense of humor and ask my hubby about such things as contract negotiations, when the endorsement checks will be coming and if next year, spring training could actually take place on the warm shores of Florida? I’ll be there, right alongside him, ready to wax sarcastic and remember that when men dare speak about cat fights, I’ll have a beautiful image of a balding, overweight Joe in spikes and a cat suit, with the caption: Me thinkest you protest way too much!
Mary Fran Bontempo2018-10-30T09:56:52-04:00August 25th, 2010|1 Comment