More Down the Shore 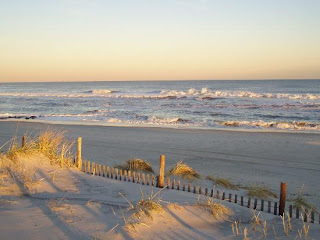 If you haven’t been ‘down the (NJ) Shore’, as the locals say, well–put it on your ‘to do’ list. Surprising to many non-area dwellers, the NJ Shore has some of the best beaches in the country. And I just spent the past week there soaking up some rays and trying a few new things worth sharing.

Zumba. If you’re an advocate (like me), you’ll find one of the better classes I’ve ever taken at the Flanders Hotel on 11th and the Boardwalk in Ocean City. Taught by a two-woman team, it’s got a real rhythm and fun competitive edge, as latin, hip-hop, Bollywood, country and even Irish Step Dancing are combined for an hour of intense movement and perspiration. I highly recommend it. (Runs MWF mornings).

Food. Of course, I cooked a few nights, but it was a vacation, so we tried two new restaurants worth mentioning. The first was Steve & Cookies in Margate. Located right on the bay, the old-fashioned-looking exterior opens to a light, airy and minimalist interior. But looks aside, the food is amazing. It is by far the best food I’ve had at the shore—Atlantic City aside. The crab cakes were full crab with a far more delicate texture than any I’ve ever had—even the incredible crab cakes from Annapolis. Mark’s tuna, which I don’t usually care for, was delicious, cooked rare and served in a most tasty sauce. My son had a man’s meal—hickory smoked pork with mashed potatoes—also done quite well, though not what I’d consider a summer meal. The menu is varied, offering options for most anyone. The reviews on http://www.opentable.com/ were quite accurate. http://www.steveandcookies.com/.

The other restaurant was Basilico Ristorante in Sea Isle City. With an interior set more like a diner, there’s no view here. But the dishes were plentiful and done with modern flair. I had pork dish done in a honey-fig sauce with fresh-made gnocchi—and it was quite good. But the best dish was probably my mother’s—cavatelli pasta with grilled chicken,red peppers and other veggies I can’t now remember. http://www.basilicosristorante.com/.

Finding good dining in this region can be a challenge—so when the summer calls, expect crowds. Call ahead to reserve a table.