Of Life and Pirates 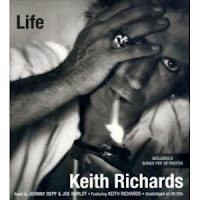 Life. Keith Richards
Reviewed by Carmen Ferreiro-Esteban
The things we do for our children. Like listen to 20 CDs of Keith Richards memoir (http://www.amazon.com/Life-Audiobook-Unabridged-Audio-CD/dp/B004CMB1UA/ref=sr_1_2?s=books&ie=UTF8&qid=1300905423&sr=1-2) so I could talk with my son like a pro. It didn’t work, of course, but that was my intention when I ordered the audio book.
This is how it happened.
Before I was a writer, I was a reader. In fact I think I started writing when I realized nobody had yet written the book I wanted to read and nobody was going to. And so I wrote Two Moon Princess (http://www.amazon.com/Two-Moon-Princess-Carmen-Ferreiro-Estevan/dp/1933718277/ref=tmm_pap_title_0) and its sequel, and then yet another fantasy story, and another, always searching for the perfect book.
But even as I write my own stories, I have remained a reader. And for two years now, I have been reviewing books for Myshelf (http://www.myshelf.com/reviews.htm). It works well, for they provide the books for free and I read them and write a review for them, also for free.
Usually, I pick fantasy and YA fiction books. But when one day I saw in their list Keith Richard’s memoir Life, I asked for it, on impulse, thinking my son, who plays guitar, would like it. I asked for it even though it was an audio and I am a visual kind of person. Even though all I knew about Keith Richards was that he was the lead guitarist of the Rolling Stones.
And there was a moment when my order arrived and I saw the memoir comprised 20 CDs, each running about 90 minutes, that I almost sent it back.
I’m glad I didn’t.
And not because of my son, who is totally indifferent to my new acquired knowledge on the playing of the electric guitar, on the story of the Rolling Stones or on what it takes to write a song. But because the memoirs turned out to be surprisingly engaging, a candid portrait of one of the most iconoclastic musicians of all times, AND (a big, capitalized and) it is (mostly) read by Johnny Depp. And for this only, I highly recommend this memoir, for his reading is perfect. His imitation of Keith Richards voice is dead on (I know this because Keith Richards, himself, narrates the last chapter), as is his mimicking other voices. For instance, his imitation of a drunk southern judge is hilarious.
So now after almost two months of listening to Johnny Depp every night, I am in withdrawal. Luckily, on May 20, he’ll be back as Captain Sparrow in the third installment of Pirates of the Caribbean (http://disney.go.com/pirates/).
And guess who plays the unorthodox Captain’s father in the said film?
Yes. Keith Richards.
I can’t wait.
Mary Fran Bontempo2018-10-30T09:56:20-04:00March 25th, 2011|2 Comments