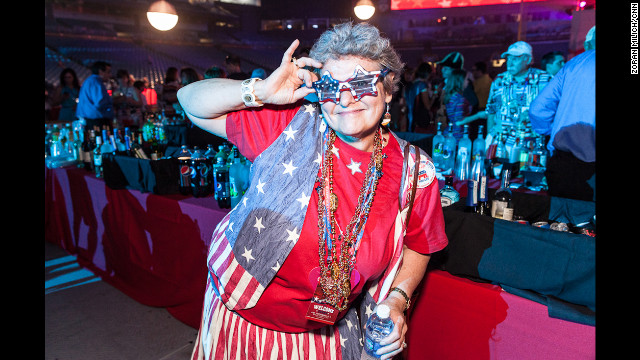 Phew! They’re finally over. The RNC, the DNC conventions. And I’m not saying this only because I’m totally intolerant of political ads and rhetoric, but I’m done with the entertainment that is the fashion sense of conventioneers.

If I didn’t know better, I would think that going to a national convention would mean that I’d go out and shop. You know, for semi-business attire (because I can’t be quite that buttoned up). But it would look professional and clean and representative of a sane voter. It would echo what the politician du jour would wear: sensible business attire—with of course, the perfect accessory in red or blue, depending upon which way you lean.

Passing hotels and convention centers, we know that this is standard attire for conventioneers. But put them on tv and convention-goers tend to lose a few brain cells. That’s right. I said it. Where on earth do these people get these ideas? Crazy red, white and blue stripe and star outfits, 2012 glasses and accessories, cowboy hats, buttons, lapel pins. They look more like contestants on Let’s Make a Deal than attendees at primetime election coverage. And to outsiders, I’ve got to believe that we appear not only as Ugly Americans; but crazy ones to boot.

And if their fashion sense weren’t enough, their behavior is suspect as well. Scary, but watching people get whipped up into a frenzy is reminiscent of Jim Jones and the Kool-Aid fiasco, or one of those televangelists who tell people to get up and walk or be healed. Maybe it’s just me. I’m cynical, skeptical and generally, not quick to jump into any group displays of emotion.

Whatever your political affiliation, I hope you will vote with me—and that is, on the side of good, sensible fashion, behavior and public displays of emotion.