The Sounds of September 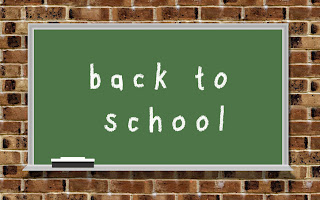 It is early September and all across the land can be heard the sounds of great rejoicing.

The first day of school has arrived and everyone has somewhere to be that’s not home.

For oh, so many years, I joined in the celebration, marked by a week of frenetic activity leading up to the event and culminating in that frantic, first morning back, when, after arguments over the bathroom and breakfast were finally resolved, everyone grabbed packed book bags and launched out the door, leaving me to enjoy a solitary cup of tea and the blissful quiet of an empty house.

It’s a sacred ritual experienced by mothers of school age children everywhere, and little else compares. Until, that is, the arrival of that another first day, which surpasses the first day of school for one simple reason: There is money involved. Money which, finally (pause to hear the angels singing), is coming into the house instead of going out.

And that day is the first day when everyone goes to work.

After a total of twenty-four years in America’s educational system, the Bontempos are done. Everyone has somehow graduated from everything starting at nursery school and finishing with college.

So this September, I thought I’d be left out of the hoots and hollers of moms who happily sent everyone out the door, closed it behind them and did a private happy dance in the hallway on the other side.

Then Megan got a job.

Meg graduated from West Chester University last May, but, as with most kids, full time employment was elusive. She returned to work at the shore, managing a shop in Ocean City, NJ, where she’s worked for the past eight years, every summer while she was in school. But it was still a summer job, not a “big girl” job, and once it was to end in September, Meg wasn’t sure what was next.

Then the call came that a position for which she’d applied online at an area hospital had opened up. The start date? Early September.

Just a few weeks prior, David, Meg’s older brother, started his real “big boy” job, complete with full time hours, benefits, in other words, a parent’s dream. And Laura, the middle child, has been dutifully working full time at her “big girl” job since last January.

But this was huge. The day Megan would start work marked the first time in my husband’s and my life that all three of our kids would be employed.

Excuse me while I take a minute and savor that last sentence. I’ll also give those of you still in the trenches a moment to insert your own kids’ names in the appropriate places. You have to start building the dream.

It’s what we parents work for, pray for, dream about, but none of us ever thinks it’ll happen. Especially after years of dance lessons, sports teams, tuition bills, and on and on; it’s nearly impossible to believe that someday, everyone will be off the family payroll.

But yesterday, September 10th, Meg walked out the door and started her new job. I didn’t have to buy her pencils or notebooks, nor did I have to make her lunch. And she dressed herself and combed her own hair. I did kiss her goodbye, as I did when she was small, and wished her luck.

And right after she drove away, I closed the door behind her with a sigh, and then I did my happy dance all the way into the kitchen, where I made myself a solitary cup of tea and enjoyed the blissful quiet of an empty house.

Back to school, back to work, it doesn’t really matter. You gotta love September.