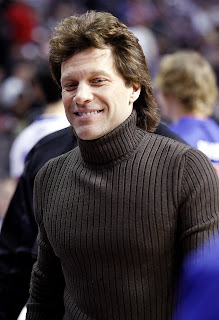 Yes, it’s him. Jon Bon Jovi.
You know him as the rocker whose career has lasted longer than many marriages. The guy with a good heart. The guy who has shared that in his newest venture as restauranteur.
That’s right. Bon Jovi has just captured headlines again with the opening of his ‘pay what you can’ restaurant appropriately called The Soul Kitchen.
True to his roots, this restaurant is not located in NYC, but rather, his favorite state of New Jersey. Red Bank, New Jersey to be more specific. Along with his wife, Bon Jovi put innovation to work, as they transformed a one-time mechanic shop into their ‘community’ restaurant.
Their concept of community is what else? Sharing. Their good fortune begets another. There are seasoned chefs in the kitchen and no prices on their menu. A donation of $10 is appreciated to cover the cost of a good, hot meal in a welcoming atmosphere. But for those who can’t cover it, no sweat. There’s an opportunity to do volunteer work instead. And if you’re hoping for an intimate meal with a soulmate, well, get over it. You may be seated next to strangers who hopefully, will share more than a meal with each other.
It’s a great new concept, based I think, on good old times. Times when neighbors called other neighbors in to share a meal and some fellowship. In times when a lot of people need some hope, Bon Jovi dishes it out.
Working for a meal includes volunteer work at the restaurant: waiting on tables, setting up, cleaning up. For those who want to volunteer because they love the concept, donations made to support the kitchen are always welcome.
If you go, reservations are highly suggested. Soul Kitchen is located at 207 Monmouth Street in Red Bank, NJ. More on: http://www.jbjsoulkitchen.org/
Mary Fran Bontempo2018-10-30T09:53:55-04:00November 17th, 2011|1 Comment