Is it lack of imagination or a metaphysical conjunction of the planets, whatever that means, what determines the movies produced in Hollywood?
I’m asking this because on the heels of the magnificent take on the Snow White classic Fairy Tale, Once Upon a Time (Sundays on ABC), I reviewed last week (https://www.notreadyforgrannypanties.com/2011/11/once-upon-time.html), next year, not one, but two movies are coming to the silver screen, about the fair skinned, raven haired, and blood-red lipped young lady that almost got herself killed for being the fairest of them all.

And it’s not the first time this duplication has happened. 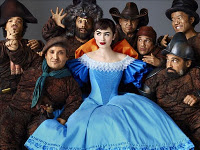 There were two movies on Christopher Columbus in 1992, which made sense as 1992 marked the 500 centenary of the arrival of Columbus to the new world. But why two Robin Hood remakes in the 1980s or two animated movies about Ants in the 1990s?

As you may have noticed, I love Fairy Tales, and so as soon as I learned of these two Snow White upcoming movies, I Googled them and watched their trailers.
Both trailers are visually stunning. But judging by them, the mood and scope of both movies couldn’t be more different.
In Mirror Mirror (directed byTarsem Singh, in theaters March 16), Julia Roberts plays a smart aleck Evil Queen with cumbersome gowns reminiscent of Cate Blanchett’s Elizabeth, and Lily Collins’s Snow White takes to the woods as a female “Robin Hood”.
On the other hand, the trailer for Snow White and the Huntsman (directed by Rupert Sanders, in theaters June 1) hints at a dark, ominous retale in which Charlize Theron takes her role as the Evil Queen seriously and Chris Hemsworth of Thor’s fame is the brutal Huntsman sent to kill Kristen Stewart’s Snow White.
Which one will be a hit–if either of them will–is anybody’s guess.
Which one do I prefer?
Although I usually don’t like comedies, this time I must confess I liked Mirror Mirror best. Why? It made me smile.
I know, not much of a reason. But there it is.
What about you? Which one do you think is the fairest of them all?
Mary Fran Bontempo2018-10-30T09:53:55-04:00November 18th, 2011|0 Comments