The Bodacious Buffets of The Borgias 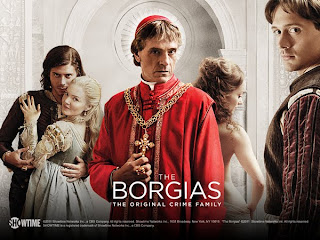 by Chrysa Smith
If you’ve been following Showtime’s latest mini-series: The Borgias, The Original Crime Family, you’re in good company. I must admit, while I do hold a certificate program in Theology and watch those Mysteries of the Bible shows I confess that I’m no saint, no preacher, no zealot. I just find these sorts of ancient, historical, theological mysteries more than a bit fascinating.
So, it is with no surprise that The Borgias has captured my TV viewing devotion—so much so, that I can’t miss an episode—which is so much more than I can say for most every show on TV (except for 60 Minutes). Why, you ask? Because this show has it all—-the medieval Roman church/state empire, greed, lust, secret families, hired assassins, poisoned chalices, theft, royal families, corruption—you know, the stuff of everyday life. But on the big screen, in vestments, 15th Century attire and the realization that lots of this big screen drama is based on reality, wow!
I actually looked up Pope Rodrigo Borgia, since I wasn’t completely sure this guy could have been real. Well, yes. Very real–despised, powerful and corrupt–and an outsider (from Spain–sorry Carmen). Maybe he’s part of the reason that the papacy has been almost an exclusive Italian boys club (but for recent years).
Of course, equally fascinating to me are the feasts enjoyed during those times and the chef spinoffs based on this series. If you log onto: http://www.sho.com/site/borgias/feast.sho you can check out recipes from Celebrity Chefs Cat Cora, Tod English, Nancy Silverton and Marcus Samuelsson. Most sound interesting, and worth a try if you ever think about hosting a Medieval feast. But I would have to acquire a taste for Tod English’s main course, which includes rooster beans, cockscomb and chicken gizzards. Try asking the clerk at your local Safeway where you might find these ingredients—
If you’d like a taste of the Borgia’s for yourself, the show runs on Showtime through April 20th, but is available ‘on demand’ and through Showtime reruns weekly. Check it out below:
Have a taste for Medieval morsels? Ancient appetizers? Recipes from another tv show? Tell us about it!
Mary Fran Bontempo2018-10-30T09:56:12-04:00April 21st, 2011|1 Comment