This week in entertainment: The Emmy Awards!

And be sure to scroll down for a review of
Carmen Ferreiro-Esteban’s new novel, Immortal Love! 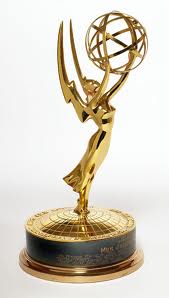 Once again, it’s time for television’s annual love fest as the 64th annual Emmy Awards take over the tube this Sunday, September 23, with coverage starting at 7 PM on ABC.

With any luck, host Jimmy Kimmel will keep things light, funny, and most important, moving along, as the glitterati heap praise upon themselves and their creations.

Usually, the Emmys are at least somewhat entertaining, given the fact that it’s the only awards show presented in the medium it’s honoring. This contingent of the Hollywood elite knows television, and knows how to play to a TV audience, making the televised Emmy awards show, if not great entertainment, at least less plodding than the Oscars or Tonys can be. TV actors, writers, et al are pretty good at being in on, and actually being, the joke, maybe because television has always been the poor relation compared to the Broadway stage or films.

And what’s being honored on the Emmys is what America knows. While some programs are out of reach for those of us with only basic cable (I’ve never seen a single episode of Curb Your Enthusiasm–sacrilege!) anyone with a TV knows programs like Modern Family, 30 Rock and The Big Band Theory–all up for best comedy.

So sit back, relax and enjoy the Emmys on television. Because pretty soon, television itself may be obsolete! (And enjoy this funny video featuring actress Parker Posey as she teaches a “Master Class” on the Emmy acceptance speech.)