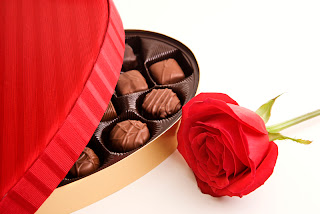 Ah, the stuff of love and Valentine’s Day.

As is the retail world’s M.O., right after Santa high-tailed it back to the North Pole, the red hearts, cupids and arrows of Valentine’s Day popped up in stores like a rampant case of chicken pox in a classroom of unimmunized first graders.

I suppose there’s nothing wrong with setting aside a day for the celebration of love, but of course, as with other holidays, it’s not a day, it’s a season. An endless, annoying, nauseau-inducing season.

Okay, I sound like a cynic. And maybe I am, but after four years of dating followed by thirty-one plus years of marriage, Valentine’s Day looks a little different to my husband and me.

For the goo-goo eyed lovers among us, a romantic dinner usually consists of fine china, candlelight, an elegant meal and a bill equal to the month’s food budget. For us? More likely noshing on hot dogs at Costco, after we’ve stocked up on bulk groceries and bargains. Plus, they’re usually running a demo on something sweet in the store, so dessert’s on the house. Hey, it beats a six dollar slice of cake.

The traditional Valentine’s Day jewelry? Given that in the past I’ve made it clear that I think it’s unfair to expect guys to drop a bundle on baubles just because the calendar reads February 14th, my husband doesn’t. And I’m fine with that. I’ve got plenty of jewelry. And when I feel like I don’t, I go and buy myself some, hand it to him and tell him to give it to me for the next holiday. That way we’re both happy. He doesn’t have to shop, and I get what I want.

Chocolates, candy and sweets? Forget the over priced twenty dollar hearts housing mediocre treats. In addition to Costco, we’re Wegman’s regulars, frequently to be found wandering the aisles (sampling stuff again), or indulging in our version of fancy dining at a second floor table after loading up on the self-serve food bars down below. Then it’s off to the bulk foods aisle to satisfy my sweet tooth with a bag of dark chocolate covered raisins and peanuts. $3.99 a pound. So of course I get a pound. And my hubby pays. It’s Valentine’s Day every time we go grocery shopping. 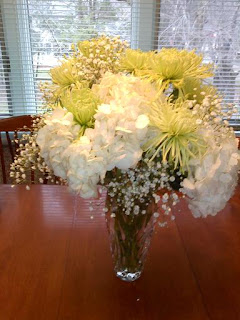 Finally, I do love flowers, but I’d pitch a fit if my husband dropped fifty bucks on roses. Better to visit Produce Junction and select a gorgeous bouqet for around ten dollars. In fact, I did just that last week; the flowers at right cost nine. Why would anyone pay more?

So this Valentine’s Day, we’ll be celebrating our love in our own particular way. But I may suggest we mix it up a bit. I’m thinking lunch at Costco followed by candy at Wegman’s and ending with a splurge on Produce Junction flowers costing around $12.00.

I mean, after all, it is Valentine’s Day.