A Real Italian Mama Would Fix this Mess 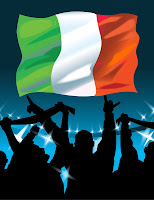 I want to see some documentation.

MTV’s has been renewed for a second season.  For those of you who’ve been living under a rock, or perhaps been much more discriminating television viewers than the five million voyeurs who tune into the program every week, Jersey Shore depicts the misadventures of a cast of young adults(?) thrown together for a summer of debauchery and drunkenness in Seaside Heights, NJ.  Well, they were in , but the town doesn’t want the cast of misfits anymore.  So far, neither does any other town in NJ.
The fact that an entire state is refusing the boatloads of money and publicity that a television show could add to its coffers should give you some idea of just how awful this program is.  And it is awful.  But in truth, the series isn’t much more outrageous than MTV’s other programs depicting young people behaving badly.
There’s irresponsible sex, in-fighting, drunkenness, swearing, narcissism, zero personal responsibility—in other words, it’s a classic MTV reality show.  (Just how “real” any of this junk is, is open to debate, of course.)  The kids may have lowered the bar a bit, but for the record, you’d have to be an earthworm to crawl under MTV’s programming standards anyway.
So what’s the fuss about?  The biggest beef surrounding is that all of the cast members are Italian-Americans and proud of it.  At least they say they’re Italian-Americans.  Crowing about their heritage as “Guidos and Guidettes,” this ship of fools won’t let anyone mistake their cultural background, much to the chagrin of Italian-Americans across the country.
Which is why I want to see some documentation.  I am an Italian-American.  I know lots of Italian-Americans, both old and young.  None of us, not one, would ever behave the way those nitwits do on national television.  Our mothers wouldn’t let us.
So here’s my position: Unless their mothers have all moved on to the great beyond (R.I.P. if so), those kids couldn’t possibly be Italian.  Their mothers, brandishing wooden spoons, shoes, newspapers, or anything else handy, would chase those ne’r-do-wells down, grab a handful of their hair and drag them home, moms yelling at the top of their lungs and whaling away at the kids’ backsides all the while.
For Italians, it’s all about respect.  You don’t mess up the family name by acting like a jackass in public.  Witness The Godfather movies—not so far off the mark, those.  Better yet, for a reality show example, just turn on TLC’s The Cake Boss, seen Monday nights at 9 P.M.

Buddy Valastro and family–mia famiglia, as Buddy says–are the real Jersey deal.  The Hoboken, NJ pastry shop owner and his crew of workers are as Italian-American as you can get.  The entire enterprise is staffed by members of the Valastro family, with a few outsiders thrown in for diversity’s sake.  There’s lots ofyelling, strictly G-rated gesticulating and commotion. But despite Buddy’s “Cake Boss” title, make no mistake; Mama Mary Valastro pilots this plane.

On one episode, Buddy was asked to make a risqué cake for a bachelorette party.  Mother Mary, upon catching sight of the anatomically correct confectionary figures meant to adorn the cake, threw an Italian mama fit.  Corralling son Buddy and cohorts in the bakery, Mrs. Valastro let the men have it.
“I told you we’re not doing that kind of cake in this bakery!  You’re the Cake Boss?  Who signs the paychecks?  I’m the boss! You fix that cake.  Now go!”  For me, the funniest scene of the season was the aftermath of that speech, when Buddy and his staff, all brothers-in-law or relatives, lumbered away from Buddy’s fuming mother, their heads hung low and tails between their legs like whipped puppies.
If you want to see a real, flesh and blood Italian on the Jersey Shore, sign up Mama Valastro for a season.  She’ll have those pseudo Italian poseurs whipped into shape faster than you can say, “tiramisu.”  And maybe they’ll learn a little about respect, for themselves and everyone else, in the process.
Mary Fran Bontempo2018-10-30T09:57:58-04:00March 9th, 2010|1 Comment