A Theatrical Trip to Jersey Hits All the Right Notes 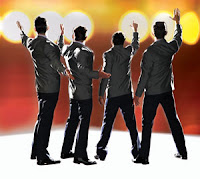 What is it about a guy who can sing like a girl that sets women’s hearts aflutter?

There’s something about a man singing in a falsetto that we ladies can’t resist.  And no one did a falsetto better than Frankie Castelluccio, a.k.a., Frankie Valli, of the Four Seasons fame.  (Oh sure, Justin Timberlake is cute, but he’s a poser next to Frankie.)

The Forrest Theater’s current production of Jersey Boys, the 2006 Tony Award winner for best musical, tells the story of the rise and fall of the Four Seasons, four guys from New Jersey who gave their hearts and souls to not only their music, but to each other.  And it does so with songs that remain as catchy today as in their heyday.  (More than a few audience members had difficulty remaining in their seats during the performance.)

Taken under wing by neighborhood thug, Tommy DeVito, young Frankie learns about music, singing and breaking the law.  Lucky for Frankie, and later, Tommy, Frankie manages to stay on everyone’s good side, eventually proving that neighborhood loyalty trumps any card, even worldwide fame and fortune.

The group, rounded out by Nick Massi and Bob Gaudio, and aided in its final metamorphasis into the Four Seasons by none other than a young Joe Pesci, also a Jersey guy, experiences all the luck, love and heartbreak one expects from a bunch of good looking young guys on top of the world.  The difference from your story or mine?  These ordinary guys soared to heights most Jersey boys only dream of, with a top ten soundtrack accompanying every move.

Despite well blended harmonies and strong voices from the cast, music early in the show all but keeps the audience on tinterhooks, awaiting the first familiar Four Seasons melody.  When the first notes of Sherry hit the ear, the crowd literally cheers.  From then on, song after song showers theatergoers with a trip down memory lane.  And when Frankie hits his stride with the falsetto, well, bring on the smelling salts.

I’ve said it before; I’m a sucker for a show tune.  And Jersey Boys, with its blend of theater and familiar (let’s be honest, I knew the words to every song) melodies and lyrics, delivers on every single count.  You’ll stand up and cheer and leave singing.  It’s the best musical theater has to offer.  Go.  Go, go, go!  And bring your falsetto; you won’t be able to resist.