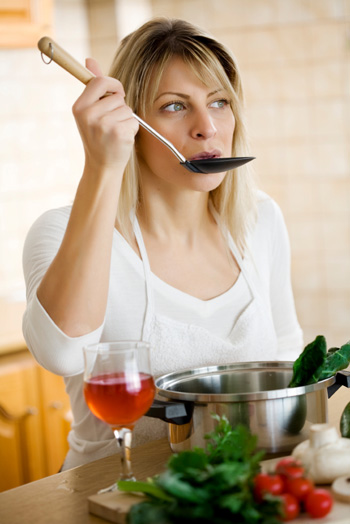 I must admit, if I didn’t work out of my home, I wouldn’t have as much time to enjoy an often-missed joy–that is, the joy of cooking. The fact that I do have time to cook is to me, one of the greatest benefits of working at home.

Now, before you can say ‘That’s not for me. I hate cooking”, let me try to frame it in a slightly different light–that is, that cooking can actually bring joy into your life. And that begins with looking at the entire process not as a burden, a drudgery—but rather a health-inducing practice that forces you to slow down, think about what you put into your body, enjoy the act of preparation as a sort of ‘mantra’ and offering it all up to those you love—to enjoy—together as a family. What could possibly give you a better daily dose of spirituality, connection and joy than that?

Cooking simply connects you—it connects you to the earth’s bounty and connects you to others. It makes you the conduit for good gatherings; good times. And there is little as rewarding as spending time eating, talking, laughing with others. It lifts spirits and souls as well as taste buds and digestion.

So many people think they’re not creative enough to cook, or have no time, they barely attempt it. Actually, good food requires not a wonderful recipe (although that can certainly heighten the experience) or a lot of hours. What it does require is the willingness to slow down and a plan–which go hand-in-hand. And that’s just so hard in a constantly quickening-paced world.

So I offer up that on at least one day of the week you plan to slow down and put the restaurant reservations on hold.  When I think about my process, it goes something like this: I take a few minutes to think about my  taste buds and stomach. For those on the run, while you’re watching American Idol or The Voice (one of my favorites), during a commercial break, think about tomorrow. What do I have in the freezer that I can take out tonight? Will I have time to bake something or quickly saute or grill? Take one minute to take it out. If you don’t have a freezer stocked (which you should), make a mental list for a short visit to the grocery store or butcher. Some forethought takes the craze out of the dinnertime crunch– which is what gets so many people discouraged. “What to make tonight?” shouldn’t come at 5pm. That does make it a chore, rather than a pleasure. That makes the whole process a ‘slam-bam’ event rather than a slowing down at the end of a long, often hard day.

So what would satisfy that desire tomorrow or tonight? Seafood, a big hunk of beef, creamy pasta? Once that’s determined, take out as many ingredients in advance as you can.  A salad? Microwaved asparagus? Baked potato? Remember, these ‘additions’ take little more than 5 minutes to prepare. They’re not total time-stealers. Think of it as a creative force in your day, while you get on with it. A glass of wine is a necessity while prepping food. It is not only relaxing and enjoyable to the taste buds, but it’s a mark–marking off the end of a day and acting as a cue to end the push, the drama, the fast pace of the day. And then I get on with the prep.

I often pan saute things like chicken and veal cutlets, seasoned with a little panko and salt and pepper. I might grill some fish or bake a small roast or meatloaf, but again, that takes little time—but still less time than it often takes to head out for a meal; even a fast food meal.

So, even if I haven’t convinced you to put down the car keys and opt to stay home instead, I hope you take away one thing—SLOW DOWN. It’s good advice–and that which I remind myself of on a daily basis.