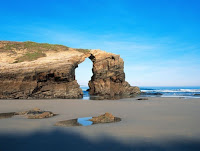 Summer weather in northern Spain was unpredictable. Clouds often covered the sky, then rain followed turning the ocean a dark gray and the tranquil waters into angry waves.

But green or gray, I loved this ocean and the beaches of white fine sand in closed coves that marked the coast of my childhood’s summers.

My favorite beach was called Aguas Santas. I still remember the first time I saw it. I was visiting my friend Felisa and it was her sister (three whole years older than we were) who took us there. We started early in the morning as we had to hike for almost an hour along the raised coast, then climb down the slippery steps carved on the wall of the imposing cliffs.

The sand was still wet by the receding tide when we reached the ground, but I barely noticed, my eyes caught in the beauty of the solitary arch that sat to our left. To our right several openings formed a tunnel like structure that called to mind the flying buttresses of a cathedral. 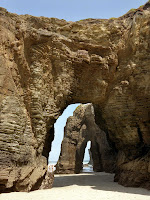 These arches had a mysterious, mystical quality for me, so it was only natural that when I wrote my first book Two Moon Princess, I made it into the portal Andrea, the princess of the title, uses to travel to another arch in northern California. A portal that only opens as the full moon rises.

When I first moved to the States from Spain, I lived in northern California and the beach I describe in the book reflects one of the many I remember from the Sonoma Coast. But for the arch. The arch I made it up.

Except it was really there, I learned later. A couple of miles north of where I was staying, there is an arch that closely resemble the one from my childhood memory. It is called Goat Rock Beach. If you don’t believe me, or if you do but want to see it, click here (http://en.wikipedia.org/wiki/Goat_Rock_Beach) and scroll down a bit.

The beach in Spain is now called The Cathedrals and you don’t have to hike to get there, you can drive and park at the top of the cliffs. But if you want, you, too , can stay at my friend’s house as it has now been made into apartments (handicapped accessible) (http://www.casafandin.com/pages/4-%C2%BFque-ver.html).

Don’t forget to mention my name if you ever go there. And just in case don’t stand under the arch in a full moon or you may end up in California. Without suitcases.

Don’t say I didn’t warn you.