Behind the Glitz of the Movies 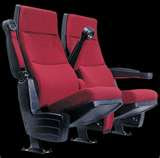 I walked into a large building of contractors painting, sanding, drilling, installing electricity, flooring, screens and drapery. It was the making of a theater, and I found the whole experience quite fascinating.

The back story is that my husband has spent most of his career –actually all of his career in the Theater Industry. In fact, we met at a theater convention–but that’s a story for another day. So, the equipment he sells to theaters often leaves him wandering the auditoriums and projection booths of new locations. And in the midst of our travels, I have come along for the ride.

If you’ve ever been involved in a ‘retail opening’, you know just how frenzied it is. For those who don’t, it’s hard to believe just how many people are involved in readying for an opening in record time. As of Wednesday of last week, walls were not complete, nor was the flooring. Open ceilings were everywhere and the exterior of the building was half-done. Of course, the ticket booth and concession stand looked both complete and great, but once inside, it was a shell of a business, with the opening just a week away–yesterday.

It’s no wonder movies are so expensive. But that’s only part of the story. You may not realize that the actual theater only pockets about 30-40% of total movie ticket sales; the rest go to the motion picture studios. In fact, studios sometimes send in ‘counters’ to ensure that theaters are actually report their full sales. So it’s no wonder that food prices are so darn high. Without the margins on that, well, we wouldn’t be sitting in nice, comfy chairs in pretty auditoriums with cushy carpeting and draperies.

We sit and watch and listen not knowing that behind the draperies on the wall are the sound panels—keeping the sound fresh and crisp and preventing it from echoing. Behind the screen are speakers, in the walls are speakers and sub-woofers—don’t ask me exactly what they do. And as I was watching everyone work, I watched each seat, individually boxed and wrapped, being opened up and drilled into the floors in perfectly straight rows and columns.

The projection booths are a different world. Most movies are now shown on digital projectors. No more filmstrips. The booths are narrow, leaving only enough room for the equipment to be mounted behind tiny windows and for the projectionist to walk around making sure everything is running as it should.

Next time you’re at a movie, before the lights go down, take a look around. You’ll see movie-going in a whole, new way.