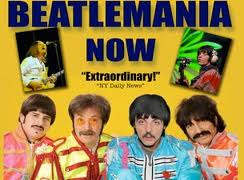 “I Wanna Hold Your Hand.” Just for a few minutes, as we take a quick tour of the 60’s and the most influential band of all time—The Beatles.
Beatlemania Now is a full production stage show that takes its audience on a psychedelic time traveling trip through the decade when The Beatles ruled the airwaves, and the lives of their fans. With a background screen streaming images from the tumultuous 60’s, four talented musicians replicate both the look and the sound of The Beatles, reminding theater-goers again why the band is so iconic.

To open, “The Mania Begins,” and Ed Sullivan introduces the group to America while screaming fans welcome them. Onto the stage bound four young lads from Liverpool, as John Lennon (an uncanny Scot Arch), Paul McCartney (still “the cute one” in the person of Graham Alexander), George Harrison (Chris Cologne, musically exceptional and capturing George’s quiet solidity) and Ringo Starr (Eric Smith as the percussion backbone of the group) take the stage and the country, by storm.

The group takes the audience through The Beatles’ early years, rocking through “She Loves You,” “I Wanna Hold Your Hand,” “8 Days a Week” and others, complete with mop-topped hair and skinny suits.

Next up, the Sgt. Pepper era, featuring the Lonely Hearts Club Band in full costume, “Strawberry Fields,” and “A Little Help From My Friends.” Moving on, the group offers The Beatles in peace and love mode, with another costume change and songs such as “Eleanore Rigby” and “All You Need is Love.” More costume changes follow the group’s changing attitudes, music and ultimate demise, while the crowd is treated to renditions of favorites like “Revolution,” Lennon’s masterpiece, “Imagine,” “Come Together,” and “Get Back.”

Beatlemania Now has played venues across the country and been called “Extraordinary” by The New York Daily News. It’s not technologically inspired, with special effects everywhere, but it doesn’t have to be. What it is, is two hours of amazing music, expertly played, by a group of artists who clearly love their subject matter. And for fans of the music, that’s more than enough.

The show recently played at the Ocean City Music Pier. Not sure when the next gig is, but if you’re a Beatles fan, be sure to check the show’s website for future dates (again, they play throughout the country) and “Shake It Up, Baby” (a rousing closing number) with The Beatles!