This week in entertainment:
A Golden Globes wrap up and
a review of the Oscar-nominated film, Zero Dark Thirty 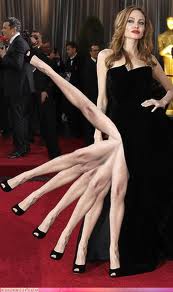 A few final thoughts on the Golden Globes, airing last Sunday on NBC.

First, thank you Tina Fey and Amy Pohler. The two funny ladies were just that–funny. Not mean, not disrespectful, just funny. A welcome change from the ugliness of former host Ricky Gervais.
Second, has everyone in Hollywood forgotten how incredibly stupid and vain Angelina Jolie looked last year at the Oscars? The self-involved, obviously insecure diva stuck out her leg from a thigh-high slit in her dress to much ridicule at last year’s ceremony. Yet what graced the red carpet at the Golden Globes? Beautiful star after beautiful star preening and posing with a leg jutting out of her dress.
Imitation is not the sincerest form of flattery, here, ladies. It’s simply an imitation of foolishness. Please, at the Oscars, let’s see some originality. And some class.
Next, what the heck was Jodie Foster talking about? Okay, I know what she was talking about, but why was she talking about it? The actress beat the drum about keeping her private life private and then proceeded to ramble on about it for…what was it…45 minutes? Or maybe it just felt that way.
And finally, kudos to Ben Affleck and Argo. The actor/director was snubbed by the Oscar nominating committee, but won as director at the Globes, and the film won best picture. Well deserved. See our review of the movie here.
The Globes made me feel alternately happy, envious and superior–to the Hollywood elite. And feeling superior to Hollywood? Well that makes for a great show.
Zero Dark Thirty–A Movie Review
By: Mary Fran Bontempo 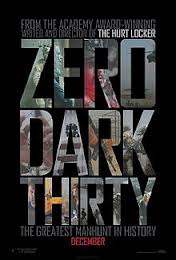 The Oscar nominated movie, Zero Dark Thirty, detailing the ten-year search for Osama Bin Laden, revolves around information. The collecting of it, the verification of it and ultimately, the use of it to kill the most notorious terrorist of our time.

And while the focus on information is central to the film, the knowledge of how that information is obtained is where the “too much” comes into play, at least where the audience is concerned.

The use of torture is prevalent in Zero Dark Thirty (a military term for half past midnight). And in an uncomfortable turn of events, the good guys–the United States military–are the ones inflicting it.

Detainees are tortured to uncover any sliver of information that could lead to the whereabouts of Bin Laden and the scenes are difficult to watch. But perhaps more difficult is the feeling that maybe the torture is justified. If information is revealed that leads to the death of the mastermind behind 9/11 and other horrifying attacks, do the ends justify the means?

The young CIA operative, known only as Maya, who is the human focus of the film, seems willing to go to any lengths to find the criminal mastermind, and it is a long and dangerous search, during which many of Maya’s colleagues die. She comes to believe that she was “spared so I could finish the job.” And eventually, she does.

Zero Dark Thirty is a powerful, provocative movie that works on many levels. Even knowing the outcome, the suspense is almost unbearable, and it’s hard to imagine the emotional toll taken on the psyche of those whose job it is to keep us safe.

It’s also hard to be given a glimpse into what those operatives know. As Jack Nicholson says in the character of the corrupt Colonel Jessup in another outstanding military movie, A Few Good Men, “You have the luxury of not knowing what I know.”

When we see a bit of what they know, it’s a frightening thing, indeed.