God of Carnage at the Walnut Street Theater

Due to a Blogger glitch, this review by guest blogger, Coleen McCrea Katz, did not post on Friday as scheduled. We’re  re-running it today. Thanks, Coleen!

This week in Entertainment we’re featuring a review of the play God of Carnage by guest blogger Coleen McCrea Katz. Be sure to find out more about Coleen by scrolling down to the end of this post! 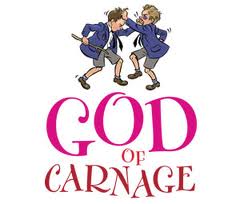 My husband and I have a subscription to the Walnut Street Theater. This is the equivalent of playing Russian Roulette in live entertainment. With a theater subscription, you have you plays chosen for you for the season. Some are great, some not so much. Some you’ve heard of, some titles you have to Google.

Last night we saw God of Carnage. This was a “Google the title play,” so we didn’t hold out much hope. When we arrived, the woman who scanned our ticket told us it would be a 95 minute show with no intermission. Excuse me? Ninety-five minutes with no intermission? Time to hit the ladies room and take care of business in advance.

Then I settled into my seat, plotting to exit if the going got too tough. (We have great seats that allow for graceful exits when necessary.) As we looked over our playbills, my husband noticed that there was a section of Booth patrons listed. I explained that it wasn’t strange since the Booth family (yes, that Booth family and the brother of John Wilkes Booth) owned the Walnut Street Theater at one point. This is the oldest theater in the country, the theater where Thomas Jefferson and the Marquis de Lafayette once attended a play.

But back to the show. The play’s premise is that two young boys have had a fight in which one boy has knocked out two teeth of the other boy. Their parents are meeting to “talk”. All starts out very cordially and then deteriorates into drunken, name calling hilarity!!! My stomach literally hurt from laughing so hard. When the very prim and proper wealth management mom ends up on the floor in a drunken stupor, it’s just plain funny! You will recognize bits of yourself, your spouse, and family members in these characters. (The cast of four actors are on stage the entire time. How they remember all of that dialog, I do not know! It must be a very draining production to perform.)

I highly recommend God of Carnage, running through April 29th at the Walnut Street Theater. I actually recommend a subscription–to the Walnut Street or a theater near you. It’s a lot of fun to go to a play a few times a year. There aren’t too many clunkers and you can see some things you wouldn’t normally choose on your own. You are guaranteed a great play at the end of the season (Miss Saigon last year and The Buddy Holly Story this season) and the price for a subscription, especially a midweek one like we have, is really reasonable.

Check out my covert cell phone photos below! 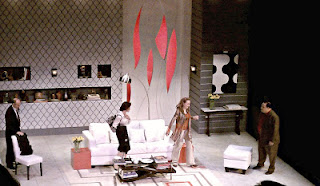