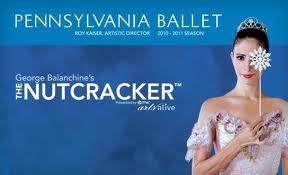 Christmas may be upon us, but if you haven’t had the time to indulge in all the holiday wonders available because you’ve been up to your elbows in cookie dough, don’t despair. Below we’ve highlighted several wonderful offerings in Philadelphia and the surrounding area that run through December 31st. If you go after Christmas, you’ll avoid the crowds and really have time to take in the magic. Enjoy!

Our first spectacle has all the makings of a modern-day reality show–sibling rivalry, battles between good and evil, lavish parties and extravagant entertainment–but this outing is a classic in every sense of the word.

George Balanchine’s ballet The Nutcracker is once again in residence at Philadelphia’s Academy of Music, lighting up the stage with glorious music, elaborate costumes and, of course, exciting and enchanting dance.
A holiday tradition, the ballet, set to a score by Tchaikovsky, features young Marie, attending her parents’ Christmas party along with her younger brother, Fritz, joyously welcoming friends and clamoring over presents beneath the tree. Yet, it is when Herr Drosselmeyer, Marie’s mysterious godfather, makes his appearance, that the magic truly begins.

Drosselmeyer’s gift to Marie is a handsome nutcracker, which is promptly snatched and broken by the mischevious Fritz. Marie’s godfather mends the toy and as the party ends, Marie lovingly places her toy in a bed at the foot of the tree, coming back to check on her treasure later that night. At that point, a battle erupts between the Mouse King and his minions and the platoon of toy soldiers, led by the suddenly animated Nutcracker Prince. It is only after Marie’s intervention that the Nutcracker Prince defeats the Mouse King and vanquishes his troops.

To show his gratitude to Marie, the Prince, now human, whisks her off to the land of the Sugarplum Fairy, where they are both celebrated and entertained by dancing candy canes, snowflakes and marzipan munchkins. The Sugarplum Fairy herself dances for Marie and her Prince, bringing the extravagant dream (or is it?) to a breathtaking close.

Always a holiday classic, The Nutcracker, performed by the Pennsylvania Ballet, is a sheer delight. If you haven’t seen the annual confection, you’re still in luck, as the show runs through Dec. 31 at the Academy of Music. $20-$140. 215-893-1999 or http://www.paballet.org/.

If an entire ballet isn’t your cup of tea, head over to Philly’s Comcast Center at 17th and Arch Streets and get ready to witness the free Comcast Holiday Spectacular, this year featuring scenes from The Nutcracker as performed by The Pennsylvania Ballet. A 3-D extravaganza, the show also features a sleigh ride through Pennsylvania, holiday music and more. The show runs every hour on the hour and lasts for 15 minutes now through New Year’s Day.

And if you’ve had it with the mall but still need a few last minute gifts, Macy’s Center City Philadelphia location (1300 Market St.) has it all. Shopping in an historic building is made all the more special by the amazing holiday light show in the grand court. This glorious ode to Christmas is made up of 100,000 brilliant LED lights dancing and twinkling to music from the grand organ accompanied by narration from Julie Andrews. (Not the original narrator, John Facenda, but an okay substitute.) It’s a must see Philly tradition that doesn’t cost a dime. Shows run on the hour through December 31st and it’s also free!

Before you leave Macy’s, it’s time to take in one more Christmas treat, for the store hosts another beloved Christmas tradition in the form of the Dickens Christmas Village, found on the building’s third floor. As you wander the Christmas Village, you’ll be treated to scenes from Dickens’ A Christmas Carol, where Ebeneezer Scrooge encounters his three ghosts before realizing the error of his ways and embracing the magic of Christmas. Charming scenes of Victorian England with animated figures take the viewer on an enchanting journey. Just the thing to remind even the most exhausted Christmas Grinch of the real meaning of the season. (Show hours through 12/31 from 10 AM to 7 PM.)

If you’d rather skip the city, head up to Peddler’s Village in Lahaska, PA for the annual display of lights and gingerbread houses. For the holiday season, trees and shops twinkle with thousands of lights, while the annual Gingerbread House Competition awaits shoppers in the gazebo located near the Pine, Wreath and Candle Christmas Shop. Best of all, if your wallet is empty, again, a walk through the lovely village and its displays won’t cost a dime.
So take some time before 2012 is upon us and enjoy the magic of the season–before Christmas is but another memory. Merry Christmas and Happy Holidays to all!