Hair in All the Wrong Places

A Middle-Aged Woman Laughs (and Cringes) at Wandering Hair
By: Mary Fran Bontempo 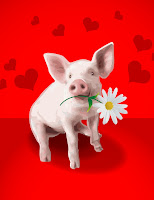 My daughter was staring. “You have a hair on your chin,” she announced.

“Oh my god! I yelped, frantically slapping at my face.

“Go like this,” Laura gestured, wiggling a finger under her own, youthfully hair-free chin, “you’ll feel it.”

Sure enough, there it was defiantly poking its way out of the bottom of my face.

I sprinted upstairs, thrashing through my make-up bag until I uncovered a pair of tweezers, whereupon I yanked the offending strand from its home.

“I think I’m going to be sick,” I groaned, as my daughter appeared in the doorway.

Oh the innocence of youth.

“Where would you like me to start, with the three little pigs or with the beginning of the great decline?”

“Do you remember the story? When the wolf says, ‘Little pig, little pig, let me come in?’ and the pig says, ‘Not by the hair on my chinny chin chin.’”

“So it’s a PIG! With chin hair! Why mention it if it isn’t significant?”

“Significant in regard to what? In case you haven’t noticed, you aren’t a pig,” my daughter graciously offered.

“But I’ve got hair growing out of my chin. People are bound to make comparisons,” I reasoned.

“Fine. If you don’t buy the pig reference, how about the fact that every picture you ever see of a witch shows her with a wart on her chin with hair growing out of it?” I countered.

“Although I have witnessed many similarities over the years, even I feel compelled to note that you aren’t a witch, at least physically, any more than you are one of the three little pigs,” she said.

“Well, maybe I’m not there physically yet, but it’s only a matter of time. Have you also noticed how long witches’ noses are?” I said.

“Once again, I fail to see the significance,” Laura said.

“It’s a fact that people’s ears and noses never stop growing. This is the beginning of the end for me. First the chin hair, then the nose morphs into a beak. Pretty soon I’ll have ears the size of dinner plates,” I moaned, dropping my head in my hands.

“What?! You were about to say ‘for your age’ weren’t you? I look really good for my age!” I snapped.

“You do look really good. And you look younger than you are. But what’s the big deal? Aren’t you the one who always told us that it’s the inner beauty that counts, not what’s on the outside?” Laura said.

“Oh, that’s just a bunch of crap we mothers are supposed to say to you kids when you’re little so you won’t grow up being superficial. Inner beauty, it’s what’s inside that counts, yadda yadda! I had a chin hair today!” I ranted.

“Actually, given how long it was, I’m going to guess it was there for longer than just today,” Laura added.

“Oh great! So any number of people could have seen it. I probably shouldn’t be seen in public for a while,” I said.

“Anywhere there are people. Maybe when you remind yourself that people come in all shapes and looks, you’ll realize you aren’t Quasimodo. And even if you were, no one cares; people have their own problems to think about,” my daughter announced.

“Okay, but can we pick up a mini electric shaver and some hair dye while we’re out?” I asked.

“You’re ridiculous, but yeah. I should probably touch up my roots, too,” she said, appraising her hair in the mirror.

I stared at her, raising my eyebrows.

“What? I’m not losing my mind like you; I just need to do a little maintenance,” Laura said.

She can rationalize all she wants. The apple doesn’t fall far from the tree. Only the details, and the hair on the chinny chin chin, change.

Want to share your own rants about a changing “exterior?”  Click “comments” below, in red, and vent!