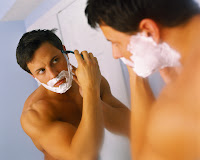 With a line now sure to become part of comedic history, actor yelps in pain as hair on his back is “waxed” in The Forty Year Old Virgin. In the film, the hair removal makes Carell’s character more attractive to women, who, apparently, are repulsed by his somewhat “furry” appearance.

Since anyone can remember, women have been shaving, plucking, waxing and otherwise depilating body hair to achieve the ever elusive smooth and perfect skin. It started with underarms, eyebrows, and legs and has moved to almost unimaginable areas. Certain young ladies of my acquaintance, who shall remain nameless, have even confessed to shaving their toes and stomachs because their slightly older, and therefore infallible, cousin told them they should.

Shaving represents a certain rite of passage, beginning, as it does, right after the onset of puberty. As kids, we can’t wait to get older, and when we get there, we anticipate with eagerness the first time when we can wipe away all signs that we’ve arrived.

But, as appears to be the tendency with us Americans, things may have finally gone a bit too far. We have become a nation obsessed with annihilating any and all signs that we are, in fact, mammals.

The proliferation of products on the market to assist in hair removal is astounding. Used to be, if you opted for an alternative to shaving, your only choice was a rather odiferous cream one smeared on the legs and left there for at least twenty minutes (or right before you passed out from the fumes, whichever came first) before rinsing away and watching hair “disappear down the drain!”

These days, there are countless gels, creams and waxes, all promising to rid us of that nasty reminder of our kinship with the animal kingdom.

But that is not the worst of it.

Where once, beauty salons made it their responsibility to help us keep and maintain our hair, now a majority of their emphasis is on finding ways to aid us in yanking it out. Entire sections of shops are devoted to hair removal, the goal of which is to pull hair out by the roots (the formerly euphemistically referred to “waxing”) and keep it from coming back as long as possible. The salon hair removal specialists often have definite areas of expertise, like physicians, and are frequently as difficult to book an appointment with.

Now we find ourselves in the midst of summer, bathing suit season, which leads us to a whole new and terribly painful phase of hair removal which I’ll leave to your imagination. Suffice it to say, I just learned what constitutes a Brazilian bikini wax, and it sounds like some form of torture which should have been banned by the Geneva Convention.

As if what we women are doing to ourselves isn’t bad enough, we’ve now convinced the younger generation of men that any sign of body hair is certain to turn them into social pariahs. Where once boys were advised to “eat your vegetables, it’ll put hair on your chest,” a young man now daring to exhibit any natural chest hair is presumed to have a lack of respect for all things civilized. Consequently, the notion of what constitutes a man’s morning shaving routine has been drastically and stomach churningly altered.

I’m not advocating that we return to our cave-dwelling, monkey-like selves, but a little restraint, please. Let nature be natural. It’s time we endorsed tolerance for those among us sporting a bit more of nature’s protective covering.

And I plan to start being tolerant right away…just as soon as I tend to those two caterpillars growing above my eyes.  If I call the salon now, I may get an appointment before September.