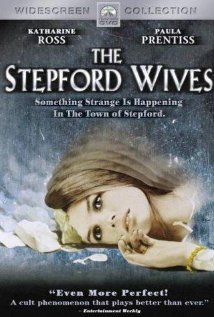 Breaking news! The remake of The Stepford Wives, starring Katie Holmes, has been suspended indefinitely.

Production has been halted because Ms. Holmes has finally come to her senses and snapped out of a Tom Cruise coma after five and a half years of psychological imprisonment…er, marriage.

Okay, before the Scientology minions start gathering at my door, it’s a joke. Kind of. Because anyone who remembers the adorable Katie Holmes from her Dawson’s Creek days has surely wondered what the hell happened to her. The Katie Holmes we’ve witnessed for the past five years has more resembled a talking Barbie doll, when she was allowed to talk.

Take a look at any image of Cruise and Holmes together. The guy has a vise-grip on his wife, almost as if he knows she’d bolt at the first sign of freedom. For her part, Holmes usually looks like she’s in a stupor, with a weird half-smile on her face. So what was the deal?

Either way, the guy has made a career of being outrageous and whether it’s due to Scientology’s influence or not, it’s altered many perceptions of the actor. Read: People think he’s certifiable. (If you missed the famous Oprah interview and need even more proof, take a look at excerpts, below.)

Frankly, I can’t imagine what Holmes saw in the guy in the first place, aside from the money, fame, jet-setting lifestyle, multiple homes, etc., etc. But now that she’s a mother, and little Suri is set to be indoctrinated into the Scientology cult…er, religion, it seems the actress has had a change of heart, desiring to distance herself from Cruise-style craziness and reclaiming her past.

Word is that her family, especially her high-powered attorney father, was instrumental in orchestrating her run to freedom, changing her cell phone, setting her up in her new digs, dismissing her security detail as well as her publicity team and wisely recruiting past employees to fill the gap in an effort to re-establish Holmes’ independence.

I wish her well. And I really wish that someone would get to the bottom of the Scientology lunacy once and for all. Those people have way too many secrets. Secret compounds, secret rituals, secret secrets. That’s far too much secrecy for something that’s a legitimate religion with the goal of raising people up instead of suppressing them (or short-circuiting their brain waves).

In the meantime, I look forward to Holmes’ next Cruise-less project. Hopefully, when the bright lights again hit her face, it will once more look like there’s someone home behind her eyes.