Losing Control with the Golden Globes 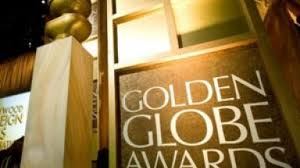 “Let’s get ready to Ruummbbllee!”

Even if you’ve never witnessed a boxing match, announcer Michael Buffer’s rallying cry has become a familiar refrain, used to launch not only boxing matches but video games, music videos, even special events like weddings. As far as I know, though, it’s never been used as the introduction to the Golden Globes.

But it could be.

The Golden Globe awards, telecast live this Sunday, January 15th from 8:00 to 11:00 PM on NBC, are the Oscars’ rough and tumble cousin. Kind of like Patty Duke was to Cathy, her proper British relative. While Cathy was adoring “the minuet, the Ballets Russes and crepes suzette,” Patty was rocking and rolling, scarfing down hot dogs and losing control—an image that echoes both the rollicking atmosphere of the Globes and the behavior of the attending Hollywood elite.

The Golden Globes, sponsored by the Hollywood Foreign Press Association, (http://www.goldenglobes.org/) are flirty, casual, randy and at times, supremely uncomfortable—host Ricky Gervais mercilessly skewered last year’s attendees and promises more of the same this year. Alcohol flows freely throughout the event and the stars wander from table to table (no stiff, assigned seating here) greeting friends and making nice for TV with foes.

Globes’ fashion is edgier stuff as well, as party-goers push the envelope with cheekier, sexier gowns, saving the more sedate stuff for February’s Oscar gala. Fashionistas alternately drool and snarl over the glamour crowds’ hits and misses with extensive coverage of who’s wearing whom. (Tune in for E!’s Live From the Red Carpet starting at 5 PM on Sunday.)

Covering film as well as television, the Globes recognizes achievements in 25 categories, seating hoity-toity film stars next to tables populated with their backwoods relations—I mean, TV stars. The whole endeavor is an excuse for Hollywood to let its hair down, not that anyone in that alternate universe needs an excuse.

But as hedonistic and self-indulgent as the Golden Globes appear…well, are, there’s actually a charitable bent to the excess, as the HFPA donated a record $1.5 million dollars to film related charities and scholarship funds in 2011, including a $250,000 grant to those affected by natural disasters in Haiti, Chile and Japan.

So go ahead and rumble with your inner Patty Duke by indulging in the guilty pleasure offered by the Golden Globes. And if you’re looking for an appetizer to snack on, may I suggest the ever popular mini hot dog in a blanket—like the Globes, it’ll make you “lose control!”