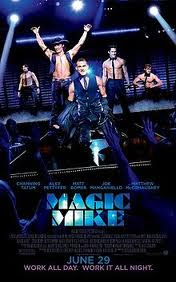 Last week, I became intimately acquainted with Matthew McConaughey’s butt cheeks and I am not happy about it.

Don’t misunderstand. McConaughey has fine looking butt cheeks. In fact, so do all of the guys who bared their bums in Magic Mike, the film currently in theaters which chronicles the tale of a male stripper (an even finer looking Channing Tatum) who indoctrinates a young “newbie” into the world of fast money, women and flesh.

Now, I go to the movies to intentionally see a lot of things that I wouldn’t ordinarily see in the passing of a normal day. The whole point is to escape from reality, right? Well, in that regard, Magic Mike certainly qualifies. I saw more things that I never see, specifically body parts of strangers of both the male and female varieties, in two hours than I’ve seen in the past 30 years. And if I never see another one, especially when it’s the size of a movie screen, I’m pretty okay with that.

For some reason, I thought Magic Mike was a comedy/dance movie, two genres that I absolutely love and happily plunk down my ten bucks to see. In all of the trailers and interviews with stars, particularly Tatum, who seems quite likeable in real life, the film came off as a light-hearted take on a subject that is way out of my realm of experience. (Okay, before I got married, my girlfriends took me to see a male stripper, but I giggled through the entire episode, actually turning it into a comedy.) So, I figured it might be fun to see a bunch of hot guys dancing around and being objectified for a change.

What it was, was seedy, disturbing and borderline pornographic. I can’t even imagine what qualifies for an NC-17 or an X rating these days and frankly, I don’t want to know. Of course, the entire thing was made even more distasteful by the fact that I was the one who had invited my 22 year-old daughter, a huge Channing Tatum fan, to come with me.

Yes, there was a fairly predictable yet somewhat endearing story, with Tatum in the “stripper with a heart of gold” role, but I left the theater feeling like I needed a shower. McConaughey, in a performance that takes him far from his usual likeable, goofball roles, was particularly smarmy.

Given my station in life (read: age), I asked my daughter if she found all the nudie-ness appealing. Her response: “I thought he (Tatum) looked sexiest when he was dancing in sweat pants without a shirt and wearing a baseball cap.”

Note to movie moguls: Women aren’t men. If you want us to drool over men on screen, it’s okay to show a little skin. But please, leave something to the imagination.

Because when you show us everything you have to offer, we’re often left wanting less.