My Week With Marilyn–Movie Review 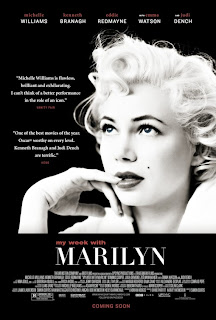 He never really stood a chance.

Twenty-three (“Almost twenty-four. I’m almost twenty-four.”) year old Englishman Colin Clark gets his first break in the film industry in 1956, working for none other than Sir Lawrence Olivier, as the world renowned actor squares off with the maddening, frustrating, yet ultimately incomparable Marilyn Monroe during filming of The Prince and the Showgirl.

My Week With Marilyn chronicles the true story of young Colin’s experiences as the movie’s “Third,” or third assistant director—“A ‘gopher,’ really,” as Colin says, to Sir Lawrence.

A mild-mannered sort, Colin does his best to satisfy the demands of his boss while remaining in the background—until, that is, the most famous woman in the world takes a liking to him.

Furiously frustrated with Monroe’s work ethic, or lack thereof, Sir Lawrence assigns Colin to “keep an eye on her,” in hopes that something, anything, will inspire the self-doubting star to memorize her lines, show up on time and work magic with the camera as only she can do.

Intensely insecure and fragile, Monroe sees in Colin the total devotion of an infatuated boy, encouraging his love-struck commitment to her. Colin responds as does every man who encounters the shimmering icon; he follows her around like a slack-jawed puppy, crafting a fantasy which has Monroe divorcing her new husband, playwright Arthur Miller, and Colin and Marilyn living happily ever after.

During their time together, Colin shows Marilyn how idyllic life away from the glare of the spotlight can be.
And for a brief period, it seems the fear-ravaged movie star finds contentment.

Of course, reality eventually interceeds, and Colin, left with a broken heart, is also left to try and make amends with the cute wardrobe girl he jilted for his Monroe fantasy. Still, as Monroe’s bodyguard notes by the end of Colin’s week, “You’re standing a little taller than when I first met you, boy,” and indeed, he is.

My Week With Marilyn, draws viewers back to a time when movie stars were their personas, as far as the public knew, with the drinking, pill-popping and bad behavior safely hidden behind the studio-crafted veneer. It makes our behind-the-scenes look at what really happened on set all the more intriguing.

A fine cast, including Judy Dench as an actress sympathetic to Monroe’s insecurities and Kenneth Branagh as an imposing and also occasionally doubtful Olivier, bring life to the story, as Eddie Redmayne as Colin Clark. But it is Michelle Williams’ reincarnation of screen siren Marilyn Monroe that truly shines. Williams is simply luminous as the star, all but combusting as the sexy Marilyn and breaking the viewer’s heart as the fragile woman who just wants to be loved.

My Week With Marilyn, like the star herself, wants you to love it, and I did, at least in parts. If you’re at all a fan of the Golden Age of film, or if you simply enjoy a good, well-told and finely acted story, it’s worth the price of admission. Not quite an “A”, but a definite “B+”. Enjoy!