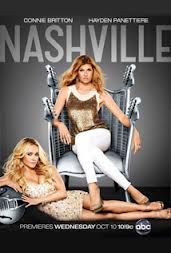 It’s got all the elements of a great country song, minus that annoying twang.

Gorgeous Connie Britton (lately of last season’s American Horror Story) as aging music queen Rayna Jaymes and Hayden Panettiere as newcomer, Juliette Barnes, set the stage for the show’s main rivalry, but it’s only one among many. Add Rayna’s relationship with former flame and musical partner, Deacon Claybourne (Charles Esten, once of the Drew Carey improv show Whose Line is it Anyway?), which is a constant presence in her work and marriage to husband, Teddy Conrad, throw in Rayna’s scheming father and sister, toss in Juliette’s drug addled mother, add a little shoplifting, some back-door maneuvering, mix in a bribe or two and well, it’s a little like the Sopranos with Southern accents.

Actually, it’s more appealing than the Sopranos, at least for me. No one’s getting whacked (yet) and there’s just something about that soft Southern drawl. The characters are flawed but engaging, there are enough sub-plots to entertain but not overwhelm, and just when you think someone is past redemption, a little glimpse of humanity keeps you guessing.

The music is first-rate as well, and all the players do their own singing, more than passably. In a stroke of brilliance, the show has also cast adorable real-life singing sisters Lennon and Maisy Stella as Rayna’s daughters. (Check out the video we ran of the girls here.)

All told, Nashville has a little bit of everything and a whole lot of charm. Definitely worth a look. Check out the trailer, below.