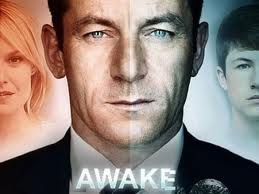 How could you even begin to choose?

In NBC’s new series, Awake, detective Michael Britten finds himself caught between two worlds after a car crash claims the life of his wife. Or his son. He’s not really certain, and neither is the viewer.

Britten is trapped between two alternate realities, one in which his wife has died, while his son lives on, and another in which his son survives. Each time he closes his eyes to sleep, Britten travels back and forth between the two worlds, unwilling to concede that either is a dream and forced to keep track of who is alive with different colored wrist bands. Further, he’s got two psychiatrists, one in each reality, desperately trying to convince him that they are real while the other has been created by his traumatized brain as a coping mechanism.

The doctors do agree on one point: Britten must give up one of his realties to truly heal and move on with his life. But how can he possibly choose?

As if two wildly different personal realities weren’t enough to handle, the detective finds his work life on the police force affected as he juggles different cases with different partners in each world. What he can’t quite figure out is why elements from the cases bleed into one another, initially confusing him but occasionally providing insight into crimes that leaves his partners baffled and concerned.

With an intriguing premise, engaging story lines and a fine cast, Awake (at least the first two episodes) is riveting. It’s also a bit of a challenge, as the viewer struggles as mightily as Britten to determine what’s real, what isn’t, and what in the heck is going on in his work. Already future conflicts are developing as Britten’s wife wants to move from their home to start over while the detective is determined to stay because of his son, who is struggling with his own adolescence as well as the death of his mother.

Hopefully, the writing will continue to surprise and engage the viewer. If it does, Awake could surely keep viewers up at night, at least until the very end of each episode.

Be sure to catch Awake, Thursday nights at 10 PM on NBC. To view previous episodes, go to http://www.nbc.com/awake/. See the trailer below for a sample.