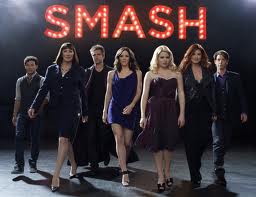 Think of it as an updated version of the Broadway musical, 42nd Street. Or better yet, Glee: The Broadway Years.

NBC’s new television musical, SMASH,  has it all: The talented chorus girl dancing the line and hoping for her big break, the naïve mid-western transplant with the golden voice waiting tables and harboring a dream of her own, a smarmy director trying to work the casting couch, and a high-level producer struggling to stay on top. But it’s subplots like the one involving the song-writing duo behind a new Broadway musical that keeps SMASH from being a Johnny-one-note rehash of the same old thing.

Debra Messing’s Julia Houston and Christian Borle’s Tom Levitt are successful songwriters suddenly inspired to create a new musical featuring the industry’s current hot topic—Marilyn Monroe. This despite Julia’s promise to her husband to take a year off so the couple and their teenaged son can pursue an adoption to add to their family. But the lure of a hit, and of an iconic protagonist who is arguably the most famous movie star of all time even fifty years after her death, is too much to resist. The ensuing conflict, even though it takes place away from the bright lights of Broadway, promises to be one of the show’s most engaging.

Anjelica Houston, playing producer Eileen Rand, also brings a different spin to the proceedings as her character’s back story unfolds. Eileen, part of a big-time production team with her husband, is in the middle of a divorce and desperate to remain on top of the Broadway heap, navigating the reworking of complicated business relationships and friendships once shared with the man she is now in the process of leaving.

The premier of any hour-long program chock full of characters inevitably leaves some personalities underdeveloped, the case with the program’s two aspiring leading ladies, chorus girl Ivy Lynn and newcomer Karen Cartwright. Both real-life Broadway veteran Megan Hilty and American Idol runner-up Katharine McPhee (Remember winner Taylor Hicks? Me neither.) have the vocal chops to carry the show’s musical numbers but had little else to do in the initial installment. Hopefully, their stock characters will develop enough to make the viewer care which of them lands the role of Marilyn in the show-within-a-show.

The musical numbers are indeed “smashing,” but the real lure of SMASH is the behind the scenes glimpse we get into the creation of a major theatrical production, along with its impact on the real people at the helm. Too often, programs that rely on musical numbers start strong but end up being nothing more than one endless music video. With a first-rate cast and compelling subplots, SMASH may be in for a long run indeed.