Strange Music to the Ear: The Used Car Odyssey 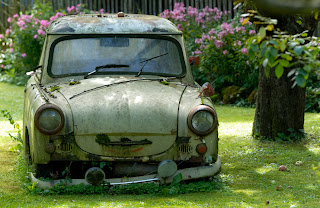 For some it’s the sound of a child’s laughter. For others, a glorious symphony or the simple song of a bird.

Personally, the sound that gets my endorphins flowing is a bit more mundane. It goes like this: “Vvvrrroooommmm!”

Pass by the Bontempo household on any given day and chances are you’ll think you’ve stumbled onto a used car lot. We’re suburbanites, and while there are things I love about living in bucolic Bucks County, being stranded in a development that’s plopped in the middle of nowhere with no accessible public transportation and nothing within walking distance isn’t one of them. With five busy people living under one roof, we had little choice but to succumb to the appearance of conspicuous consumption and get cars for everyone.

Lest you think we’re all comfortably ensconced in late model vehicles with heated leather seats and sun roofs though, let me disillusion you. We own two Chevy Blazers, a 1996 and a 2001 model. My son’s car is a 1998 Ford Explorer. My husband drives a 2002 Mercury and I tool around in a 2004 Rendezvous which, I might add, my daughter has named “Shrek” as the shadow cast by the outside mirrors on the car resembles nothing so much as the cartoon ogre. Five drivers in the house, five cars in varying states of old age and infirmity disintegrating in the driveway and at the curbside.

Put a key into the ignition of any one of those vehicles and the sound you’ll hear could be anything from the standard “Rrrrrrrrrrrr” to the irritating “Ticktickticktick” to the dreaded “_________________” or nothing. It’s the equivalent of a nursing home community on wheels.

And, like the old folks they imitate, these cars suffer a standard line of infirmities. Instead of knee and hip replacements, we have failing alternators, starters and fuel pumps, all of which have been replaced on each of the kids’ cars, to the tune of around $450 per repair. So, let’s see, that’s $450 times nine, which comes out to $4,050.00. This past summer, my husband’s air condition compressor passed on and the repair set us back another $400. Shrek has needed a new transmission as well as his driver’s and passenger side windows fixed (twice), for a price tag of $3800.00. You’ll have to do the math for the grand total; I’m getting light-headed.

With a track record like that, you can understand why I remain frozen in place, holding my breath and praying, whenever someone leaves the house to go somewhere. It’s only after I hear the cars start and the drivers pull away that I can exhale and continue about my business.

Until then, however, I guess I’ll have to be satisfied with the one sound that remains music to my ears, a good, healthy “Vvvvrrrroooommmm!” followed by my huge sigh of relief.